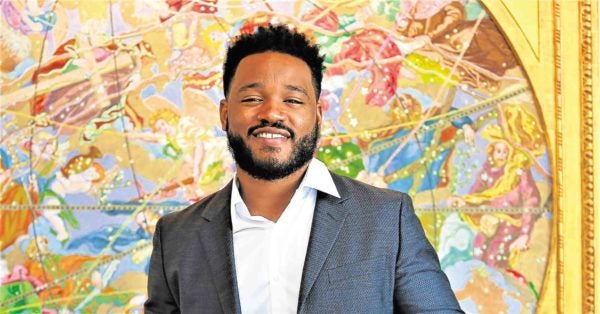 LOS ANGELES—Marvel’s first predominantly black superhero film is a critical (it’s the best scoring movie under this genre on Rotten Tomatoes, at 97 percent) and commercial (one of the top all-time openings in North America) success.

Ryan Coogler, the filmmaker du jour, who was only 30 when he made “Black Panther,” was recently hailed by IndieWire as the new Steven Spielberg. His groundbreaking Marvel Comics film, which stars Chadwick Boseman, Michael B. Jordan and Lupita Nyong’o, is only his third directing feature.

Ryan made a splash with his directing debut, “Fruitvale Station,” which won the grand jury prize at the Sundance Film Festival in 2013. For his second film, Ryan managed to revitalize the “Rocky” franchise with Michael, his muse, as the son of Apollo Creed.

The Oakland, California native majored in finance at the California State University, Sacramento, where he was enrolled on a football scholarship. But even then, Ryan was already taking film classes. He went on to study at the University of Southern California School of Cinematic Arts, where his short films won awards. Married to Zinzi Evans, the director volunteers as a counselor to jailed youth at the Juvenile Hall in San Francisco.

For his next film, Ryan reunites with Michael and returns to straightforward drama with “Wrong Answer,” an adaptation of Rachel Aviv’s New Yorker article about the Atlanta public schools cheating scandal, which began in 2009.

Can you talk about the pressure you felt about coming out with this film? That pressure was real. What I try to do is keep pressure as a source of motivation. After that, I just tune it out because if you think about it too much, it would make it impossible for you to do your best work.

A film of this size with this much going on, there are so many decisions to be made, so you try to keep the pressure out so that you can make a solid movie that works … that’s entertaining and universal.

Within this huge Marvel machine, was the idea to make a movie about black identity? One of the things that I thought about for this film was, what does it mean to be African? For me, that question motivated all the decision-making that went into the film.

It is a film that deals with identity, the concept of tradition and innovation. Those themes, although they’re very African ideas, are human ideas. So, for me, what does it mean to respect traditions? But, at the same time, divert from them when it becomes necessary.

Hollywood does not have a rich history of showcasing African culture. What were you encouraged to do because of the nature of this movie? The biggest thing that the film afforded me was research. It was a rare opportunity to dig into something that I always had curiosity about since I was a child. The last two movies I made, I started them out with questions, but they were about things I was obsessed with at the time.

This idea of, who am I? Like, I had this question as a kid. My parents had to tell me, you’re black, you come from Africa. We’re here now. I always had a profound curiosity about the continent, but I’d never been there until I signed onto this film. For me to do this efficiently, I needed to go to the continent, spend some time there, do some research.

They said, great, so I got to go for the first time. I went to South Africa first. I went to a country called the Kingdom of Lesotho. I spent some time in Kenya. Then, I came back to the United States.

Young African-American children now get to see someone who looks like them. How much satisfaction does that give you? It’s a huge responsibility, and it’s one I feel very fortunate to be able to do. I felt honored to be allowed to make this film.

I tried not to think too much that it was the first time that something like this was happening. Because that can get tricky. I tried to stay positive and focused on the work. This is to Kevin Feige’s credit—he said, “Look, man, I have a son who’s young and white, but I want him to look up to childhood as much as you would.”

I think anybody could get behind T’Challa. Although he has cultural specificity, the themes he’s dealing with are universal. The themes that make him cool are awesome. When I was young, my favorite superheroes were white. I went to the “X-Men” movies. I love Wolverine, Batman and Superman. When I say I love Batman, I didn’t think about the fact that Batman was white. I just loved Batman because he had cool gadgets, a cool suit and seemed to do what was right.

That said, when you look at the whole aggregate of this stuff, you realize like, wait, none of these people look like me. But when you’re consuming the stuff and fall in love with it, you’re not thinking about what they look like, really. So, hopefully, this movie can also work that way for other fans.

What movies did you cheer for? I was a big Rocky fan. I watched those movies at home with my dad. We would yell at the TV. I loved a lot of the MC (Marvel Comics) movies, man. I remember being with a raucous crowd and all that’s done at film school. I remember that like it was yesterday, cheering for stuff like seeing Ironman blast off.

I remember the first time I saw “The Dark Knight” at 3 a.m. on an Imax screening. I watched with my wife, who was my fiancée at the time. We were a bunch of fans just going nuts every time something cool happened.

Can you talk about your reference sources for the female characters? The women are paramount to the story. What we wanted to do was build a society that’s both based on the source material and also pulled from historical content, looking at the history and role of women in African society, specifically precolonial African society.

We saw tons of examples of women who had high-ranking political positions and were respected as warriors. We wanted to push that idea forward in this film. I truly believe in any society that’s functioning well, you’ll see that women tend to be the backbone of it. They tend to be the ones who work to keep the family afloat. They keep society functioning, so we really want to represent that.

It’s about a king, but he’s able to be king because of these incredible women around him. These women who were empowered to be great at the things they chose to be great at. So, we thought that could be an interesting way to tell a story.