Maria Ozawa gets apology from TNV company, promises to track driver who gave away her number 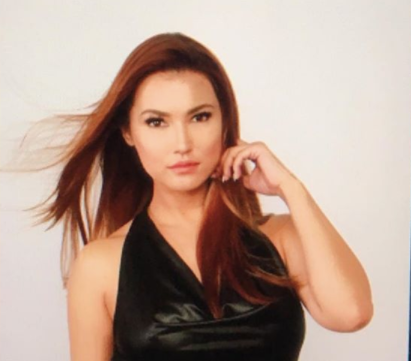 After actress and former adult-entertainment star Maria Ozawa complained on her social media page that a driver gave away her number to the public, the TNV company has reached out to her and apologized for the mishap she encountered.

On her Facebook page on Friday, Ozawa said that an Uber Philippines staff called her and promised to track down their employee who violated her privacy. Uber found out that the mysterious “Ben” who texted her was the TNV driver himself.

“He made an excuse of saying he got it from the driver, when [in fact], he was the driver. Unbelievable!” she expressed. 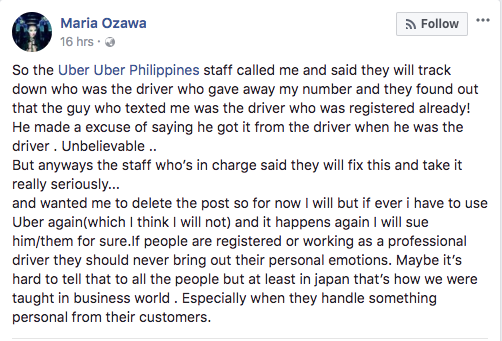 She added that the company staff  promised to fix her problem and “take it seriously,” and asked if she could delete her previous post, to which request she complied.

“…but if ever I [will] have to use Uber again  (which I think I will not), and it happens again, I will sue him/them for sure,” Ozawa threatened.

Not stopping there, the former adult star went on that “if people are registered or working as a professional driver, they should never bring out their personal emotions.”

“Maybe it’s hard to tell that to all the people but in [J]apan, that’s how we were taught in [the] business world,” she continued.

Leaving a comment, one netizen apologized to her and asked her that not all drivers are like the one she experienced. In reply, Ozawa said “Of course.”

Her issue with the ride-hailing company is one of many issues that the industry has encountered. Previously, Uber confirmed that over 100,000 Filipino users have been affected by data breach. /ra