Maria Ozawa slammed ride-hailing drivers’ unprofessional behavior after experiencing incidents of stalking and even sharing of her mobile phone number.

PLEASE SHARE!!!!!Are you serious Uber Uber Philippines UBER DRIVERS PHILIPPINES !?!?! What is wrong with your…

A man named “Ben” told her he got her number from an Uber driver.

He said, “Sorry. I just want to know your name. And things you like. Hope you won’t get mad.”

Ozawa said that she doesn’t use her real name when using TNV (transport network vehicles), but still experiences her privacy being invaded.

She shared that she hadn’t received assistance from Uber as their hotline went unanswered.

The actress, who is currently a business partner in the Philippines, couldn’t help lamenting, “I LOVE the Philippines but Why can’t I trust this country AT ALL!? Why are the people SO UNPROFESSIONAL!?”

When a netizen suggested she use Grab, she replied, “It happened to me in Grab too. This country is seriously lacking with professionalism.”

Some comments suggested she change her behavior to avoid such incidents. One proposed she use sunglasses to mask her identity. She said she already goes through several measures to do so. 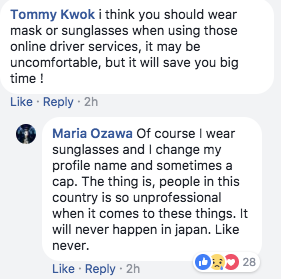 “Of course I wear sunglasses and I change my profile name and sometimes a cap. The thing is, people in this country is so unprofessional when it comes to these things. It will never happen in Japan. Like never.”

One stated that she should use her “common sense” and get a different number. The netizen rationalized the drivers’ behavior as “boys will be boys” and told her to “go back to Japan.” 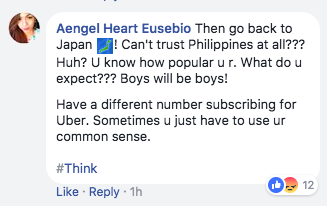 Other netizens saw past the victim-blaming, explaining that the drivers’ actions were wrong and that public personalities still have the right to privacy.

“It’s like you’re giving boys a license to do bad things because they are boys,” read a comment. “Uber and Grab have [a] privacy policy and if the drivers are following this policy, they won’t give out numbers of their riders, celebrity or not.”

Ozawa replied to the comment, “If people are registered or working as a professional driver they should never bring out their personal emotions. Maybe it’s hard to tell that to the people here but at least in Japan that’s how we were taught in business world.” 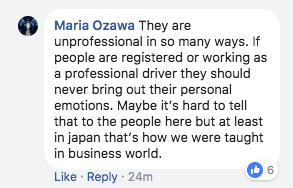 Ozawa also received sympathy: A netizen admitted that she had a similar experience. “I guess some people (men) do not know proper manners and respect.” 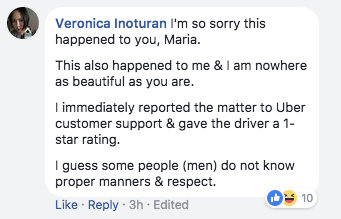 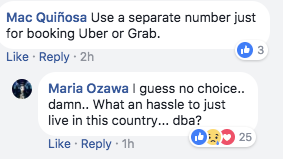 “What an (sic) hassle to just live in this country… dba (right)?”

Women’s safety and customers’ privacy have been a problem among ride-hailing apps.

In 2016, an Uber driver in Quezon City allegedly forced a woman to perform oral sex. In the same year, a former forensic investigator for the company revealed that Uber employees in the US used customer data to track politicians, celebrities, significant others, or exes.

Uber confirmed last year that over 100,000 Filipinos were affected by a data breach. /ra

Maria Ozawa in a relationship with hunky Pinoy actor-chef?