The Cranberries frontwoman Dolores O’Riordan, the unmistakable force behind the ethereal hit “Linger” and the fiercely political “Zombie” passed away on Monday, Jan. 15 in London. The band catapulted to the 1990s alt-rock scene from the recesses of Limerick, Ireland, making pixie-haired O’Riordan’s feisty yodeling and Celtic-influenced singing a familiar soundtrack to many Gen-Xers’ youth.

These mournful fans, along with the band’s fellow musicians and other personalities, poured out their sentiments through posts in social media.

The band announced the demise of O’Riordan in its official Facebook and Twitter pages, where flocks of fans wrote back. 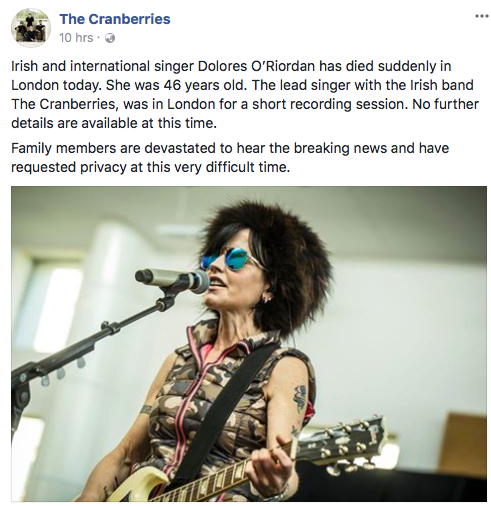 Other fans wrote directly on O’Riordan’s own Twitter page, where the last post was dated Jan. 4, showing the rock star carrying her cat Gio.

In other pages, fans who personally knew O’Riordan reminisced about her, being a singer and musician as early as her pre-teen years.

As fans shared their own memories of O’Riordan, more notable figures took to their own Twitter pages to express their sorrow. 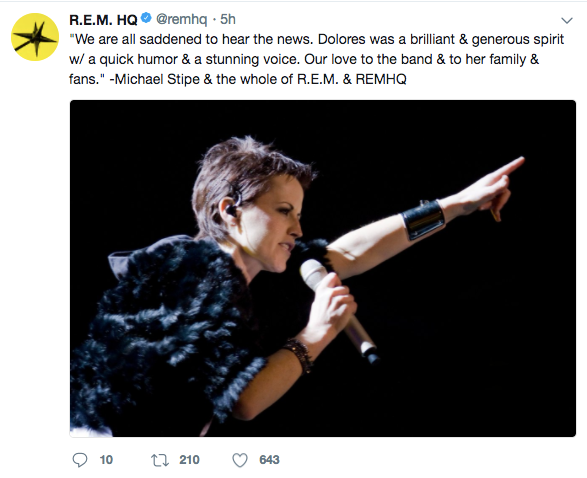 Apart from the iconic bands from the 1980s and 1990s Duran Duran and R.E.M., younger bands Foster The People and The Script, and another known 1990s singer-composer Liz Phair, comedian James Corden also posted condolences.

A voice who sang through her troubles

O’Riordan has been open in past interviews about her personal troubles. Apart from surviving sexual abuse when she was a child and battling depression for years, she has also been diagnosed with bipolar disorder. The death of her father in 2011 was a big blow to the singer. She and her husband of twenty years, Duran Duran tour manager Don Burton, divorced in 2014.

Her suffering, which she has been open and honest about, has always been intertwined in her songs, often a preview to many intimate moments such as the highs and lows of love, existential dilemma, self-discovery, and even anger about political issues affecting her fellow Irish.

Last year, as the band was scheduled to perform a series of shows, O’Riordan felt sad about having to cancel tour dates due to a serious back pain. The singer has attempted suicide in the past.

As of press time, the cause of O’Riordan’s death is still unknown. JB