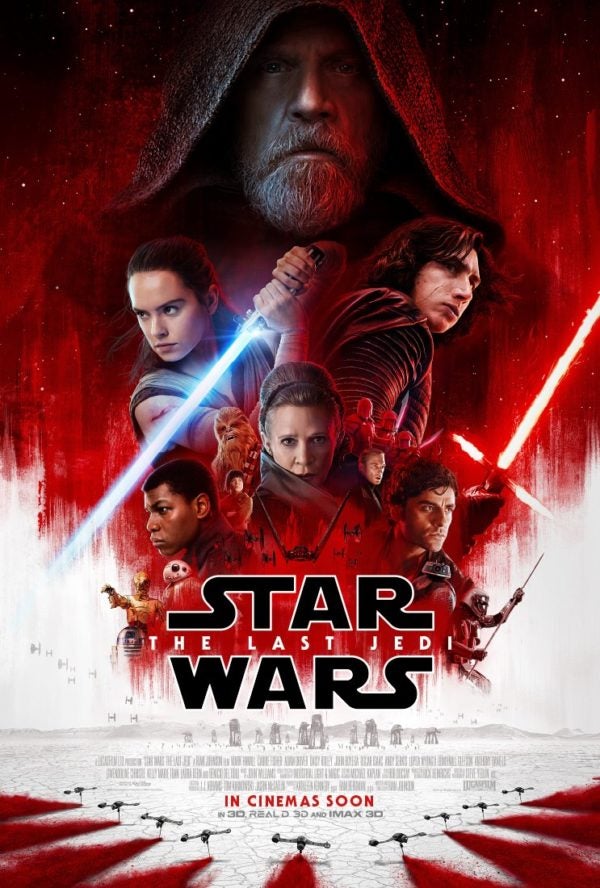 The latest episode in the iconic “Star Wars” space saga finished the year on top of the domestic box office, data confirmed Tuesday, contributing to a second best-ever year for Disney.

“The Last Jedi” earned $66.8 million over the four-day holiday weekend in North America, for a $531.5 million domestic total since its opening three weeks ago, said industry watcher Exhibitor Relations.

Disney announced on Sunday that the movie had passed the $1 billion mark worldwide after just three weeks, and the latest figures cement its position as 2017’s most successful film in North America ahead of another Disney property, “Beauty and the Beast” ($504 million).

Its domestic earnings come on top of an international take estimated at $534.8 million, Disney said in a statement Tuesday.

The entertainment giant—which owns live-action and animation divisions as well as Pixar, Marvel and “Star Wars” producer Lucasfilm—added that its $6.5 billion global total for 2017 had given the company its second biggest year ever and the third largest in history.

It is the second consecutive year Disney has surpassed the $6 billion mark.

“We couldn’t be more grateful to all the movie fans around the world for their support,” said Walt Disney Studios chairman Alan Horn.

“This success is a tribute to the incomparable team at The Walt Disney Studios and The Walt Disney Company and to the amazing filmmakers and talent we’re fortunate to have making these pictures with us.”

While “The Last Jedi” ruled at home, Disney’s “Beauty and the Beast” was the number one film globally in 2017, with a worldwide take of $1.3 billion.

Holiday viewership provided a boost not just for “Jedi” but for Sony’s family adventure “Jumanji: Welcome to the Jungle” which came in a shade behind on $66.3 million in North America.

In third was “Pitch Perfect 3” from Universal, at $21.7 million for the four days. The cast, led by Anna Kendrick, follows the continuing adventures of glee singers the Bellas.

Next was “The Greatest Showman,” from Fox, at $20.9 million. The musical features Hugh Jackman as legendary circus impresario P.T. Barnum.

In the fifth spot was the animated family feature “Ferdinand,” the story of a peaceful Spanish bull forced to take on the world’s most famous bullfighter. The Fox film netted $14.9 million.

Read Next
‘Jeopardy!’ contestant loses $3,200 after using ‘gangster’ instead of ‘gangsta’
EDITORS' PICK
Beyond the Chocolate Hills: A farm-to-table, heritage culinary adventure of Bohol
Metro Manila logged most number of new COVID-19 cases — OCTA Research
WHO says monkeypox is not yet a health emergency
A massive highway complex makes living in the South highly attractive
Guarding Sara: Why next VP is getting own security team
House energy committee chair Arroyo bats for cheap electricity
MOST READ
Leon Barretto steps up for sisters, asks dad Dennis Padilla: ‘Please stop resorting to public shaming’
LOOK: Rita Daniela pregnant with first child
Marjorie Barretto to speak up on Dennis Padilla, kids’ relationship ‘in time’
Guarding Sara: Why next VP is getting own security team
Don't miss out on the latest news and information.