‘Jeopardy!’ contestant loses $3,200 after using ‘gangster’ instead of ‘gangsta’

This was the lesson learned by “Jeopardy!” contestant Nick Spicher after answering a question on the longtime show’s New Year’s Day episode.

Let Nick’s mistake be a lesson to us all. In 2018, you gotta keep it gangsta at all times. Never Gangster #Jeopardy pic.twitter.com/NMO7QsAfyI

Under the category “Music & Literature Before & After,” the question asked was to combine the title of two works: “A song by Coolio from ‘Dangerous Minds’ goes back in time to become a 1667 John Milton classic.” 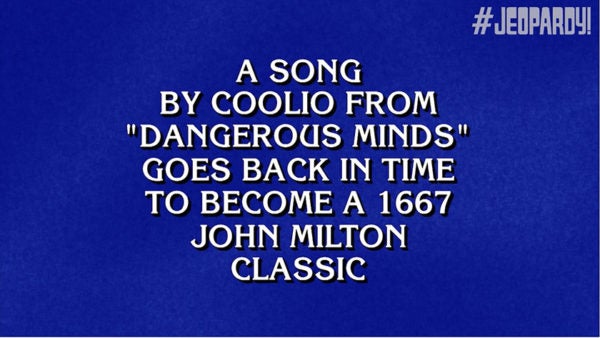 However, his earnings were rescinded when “the hard R sound caught the ear of one member of the onstage team,” said “Jeopardy!” in a statement.

Making the blow even harder was that it was a Double Jeopardy round, meaning the deduction was doubled to $3,200. The flub demoted him to second place.

Spicher, a children’s museum manager from Washington, still went on to win the game.

The gameshow’s statement read, “It turns out that ‘gangsta’ and ‘gangster’ are both listed separately in the Oxford English Dictionary, each with its own unique definition.”

“Nick changed not only the song’s title, but also its meaning—making his response unacceptable,” it noted.

The dictionary defines “gangster” as “a member of a gang of violent criminals.” “Gangsta” refers to “a gang member” or “a type of rap music featuring aggressive macho lyrics, often with reference to gang violence.”

“I probably would have given it to him, but…for white people, the ‘er’ will always get you in trouble,” quipped rapper Coolio in an interview with TMZ. /ra

My close encounter with ‘Jeopardy’ host