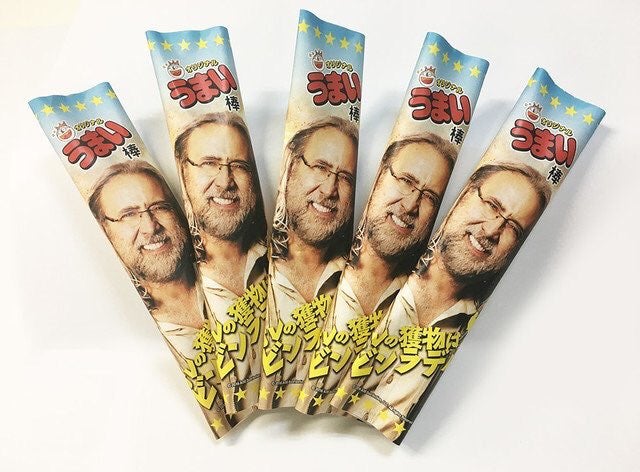 Makers of the popular snack Umaibo has partnered with the Japanese cinematic release of Hollywood movie “Army of One”, known to Japanese moviegoers as “Ore no Emono wa bin Laden” (Bin Laden is my Target).

The partnership involves releasing a special edition Umaibo snack called “Umaibo Nicolastick” as reference to actor Nicolas Cage’s role in the movie. An announcement was also made through the movie’s Japanese Twitter account. 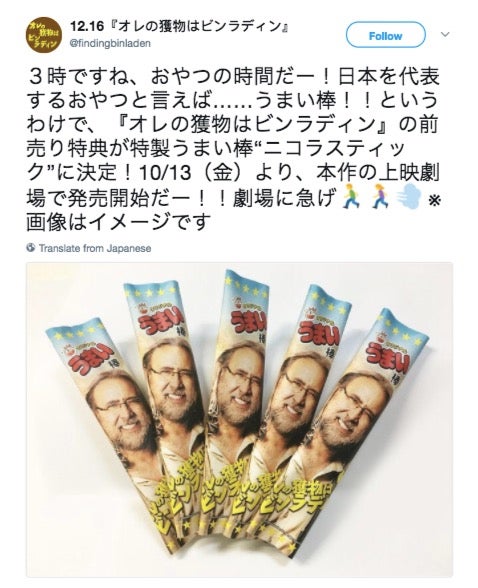 The text details instructions on getting Nicolastick by purchasing advanced tickets. Image: Twitter/@findingbinladen

This corn-based snack will not have any special ingredient. Odd, considering Umaibo has dozens of flavors to choose from in the local market. The Nicolastick will just be a repackaged edition of the standard Umaibo. The snack will not be sold in stores, reports SoraNews24.

Moviegoers and Cage fans can get Nicolasticks by purchasing advanced movie tickets for “Bin Laden is my Target” starting Oct. 13. Each ticket costs 1,500 yen (about P680), and while each ticket purchase promises free Umaibo, it has not been disclosed yet exactly how many pieces will a ticket holder be entitled to.

“Bin Laden is my Target” premieres in Japanese theaters this Dec. 16. Alfred Bayle/JB