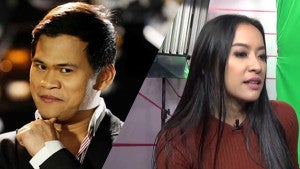 Talent manager and entertainment columnist Ogie Diaz called out Mocha Uson over her rants on the “strong parental guidance” classification, which she tackled in her recent video post about television networks airing “obscenity” in their programs.

In Uson’s video post, the Movie and Television Review and Classification Board (MTRCB) member readily took to the public her argument about the “overly graphic” scenes that have been allowed to be aired on television. According to Uson, the controversial scenes in the episodes wrongly fell under general patronage.

In Diaz’s Facebook post last February 19, he called out Uson’s process of bringing the matter before the public instead of discussing it first with the board chair through a scheduled meeting: “Ikaw naman. Sa Monday pa pala ang meeting mo, nagsumbong ka na agad sa taumbayan.”

(Your [MTRCB] meeting was supposed to be on Monday, and yet here you are quickly complaining before the public.)

(You should have finished the meeting first. Should nothing happen in your meeting with the MTRCB, that would be when you ought to report to the public.)

The comedian also critiqued Uson for her condemnation of episodes she refers to as “unfit for general viewing,” namely episodes of ABS-CBN programs “Ipaglaban Mo” and “The Better Half”.

Contrary to how dedicated she appears to be on her job, Diaz addressed Uson, “Saka, ikaw naman. Nalaman ko, hindi ka um-attend ng board meeting (I learned that you were not attending board meetings.).”

Diaz suggested that Uson should tell her fellow board members her concerns about the standards for the classification “strong parental guidance.” He also divulged that he heard about Uson being not vocal during meetings.

But more importantly, Diaz stressed that Uson should back her public rants and complaints with evidence.

(You know what, Mocha, it’s nicer to go public about your rants if you have sufficient records and evidence on these scenes which you call obscene. This way, you give the public a chance to judge the scenes for themselves and figure out if they should side with you.)

(But sister, study first the post you accepted. Don’t keep ranting out to the public as if you’re being bullied by the 29 board members.)

At the end of his statement, the comedian urged Uson to transform her rants into actions, even urging her to explain her side of the issue. Diaz said that should Uson be able to prove her point, he will issue a public apology to her. JB