How John, Robert and Bo cope with midlife crisis 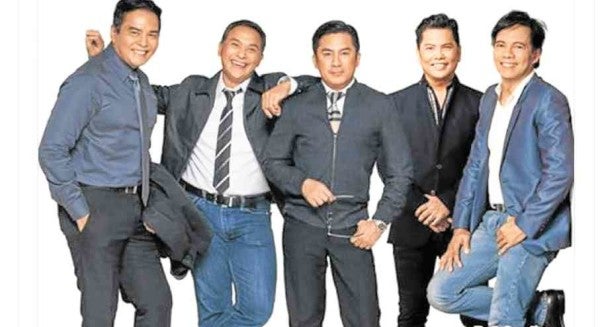 The onset of midlife crisis is what “Dirty Old Musical (D.O.M.)” is basically about. The original Filipino musical of Spotlight Artists Centre was a rousing success last September, so it’s back by popular demand. The OPM tunes in it are such a “throwback delight.”

I enjoyed the musical from start to finish, and I can’t wait to watch it again. “D.O.M.” will definitely be lovelier and zanier the second time around.

Here’s my chat with Bo, Robert and John:

How are you coping with midlife crisis?

Bo: I simply savor each moment, assess myself and do a lot of physical activities.

Robert: A crisis can start any time. It’s up to us how we deal with it.

John: After all these years, I have learned to be more positive and thankful for all the blessings. You fail, you learn.

Do you believe that men are polygamous by nature?

R: Men are born to be sexually active. But some women are polygamous, as well.

J: We grew up in a society with double standards. Physiologically, a man’s testosterone is designed for conquest and those who conquer more are considered the better breed.

What do you find hard to understand about women?

B:  It’s quite easy to know if a woman is hurting, rejoicing or trying to prove that they’re better than men.

R: I love women, so I understand their quirks. Some are easy to understand, and some are helpless (laughs).

J: It’s only an imagined misunderstanding.

What song would you rather not sing?

B: Songs nowadays that blatantly overuse the “F” word.

J: Songs that have a negative message.

What’s your favorite line and scene in “D.O.M.”?

B: I like the lines where my character admits to his alcoholism. The scene I like most is where Francis (played by Fred Lo) reconciles with his long-lost father, played by John.

R: Nonie’s line about turmeric (laughs) says a lot about our aging body. My favorite scene is the Hagibis number.

J: The lines of the song, “Kaibigang Tapat,” reminds us that there will come a time in our lives when the only refuge we have are our friends. My fave scene is my confrontation with my ex.

What do you know now that you wish you knew when you were younger?

B: That the most permanent thing in this world is change.

R: The power to control what I spend.

J: That life isn’t bad at all. I wish I were bolder and more aggressive.

What was a life-changing moment for you?

B: When I applied as the last contestant of the more than a hundred applicants in the 1985 Students’ Pop in UST.

R: When Christ came into my life, and my relationship with Him became personal.

J: In 1990, when I was a young company actor of CCP’s Tanghalang Pilipino, one of the icons I admired in theater died and her colleagues had to raise money for her hospital bills and burial.

What song best describes your state of mind at this point of your life?

B: “Imagine” by John Lennon

R: “That’s the Way of the World” by Earth, Wind and Fire

J: “This Is My Life” by Shirley Bassey

What’s the most mischievous thing you did in your youth?

B: When I was in Grade 1, I went around our classroom kissing the hands and cheeks of three of my prettiest classmates.

R: When I motocrossed in the golf course of Alabang Country Club and picked some mangoes without knowing it was illegal. I ended up in a police precinct.

J: When I was 13 and still a freshman, I took shots of gin and waited for a girl (a senior student) to come out of her house and say ‘yes’ or I’d kill myself.

If you could be 20 again, what would you do differently?

B: I’d go through the same life path, except for certain romantic relationships.

R: Nothing. Everything happened for a reason when I was younger. They’re what molded me into the person I am now.

J:  I will be a little wilder and bolder. I was a convent boy when I was growing up.