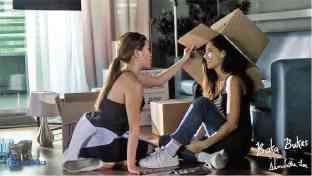 There’s nothing to be afraid or ashamed of. They are two people in love—the only difference is that they’re lesbians,” explained Jasmine Curtis-Smith on why she had agreed to do a kissing scene with costar Louise delos Reyes in the indie movie “Baka Bukas.”

The lesbian-themed film by Samantha Lee is a finalist in the narrative category of the 2016 Cinema One Originals, an annual film festival that will run from Nov. 13 to 22 at the Cinematheque Center in Manila, Trinoma, Glorietta, Gateway and Greenhills.

Jasmine said filming the kiss took three takes to finish. “It wasn’t a long kiss, we just needed to make it as perfect as possible,” she stressed. “It seemed like it was OK to me. I didn’t feel awkward at all. Louise and I were still able to talk to each other when we finished shooting the scene. We’re both professional actors.”

What Jasmine said she needed to work on was her relationship with Louise. “It was good that we got to talk to each other during our first shooting day. As an actor, I felt that it was my responsibility to make my coworkers feel comfortable when I’m around. We got along really well. She’s very easy to talk to,” Jasmine added.

“I made her tell me stuff about herself. We tried to look for common ground so we didn’t feel awkward when the camera started grinding,” she shared with the Inquirer.

Jasmine said kissing another woman for a pink film “shouldn’t be a big issue at all.”

She added: “Working on this project was a great experience not only because it was my first time, but also because everyone on the set had an input on how the characters should be played, especially Direk.”

“No hesitation at all—I immediately agreed to join the project,” said Jasmine on her initial reaction when the movie was offered to her.

She added: “This was because most of my friends are working on improving how people view the members of the LGBT (lesbians, gay, bisexual and transgender) community through articles, illustrations, and now, film. It’s time that we see them in a different light.”

Jasmine clarified that “Baka Bukas” is nothing like the Abdellatif Kechiche film “Blue is the Warmest Color,” which was released in 2013.

“That film is more explosive,” she pointed out. “It’s actually sad that Filipinos are not yet open to relationships like this,” she told writers during the recent launch of 2016 Cinema One Originals at the ABS-CBN Compound in Quezon City.

Close to the heart

Director Samantha said the material was “something really close to my heart. Translating it to the big screen wasn’t hard because I already knew in my mind what to do. I’m just glad that these actresses took a risk with the project.”

Asked how similar “Baka Bukas” is to another lesbian-themed film, Sigrid Andrea Bernardo’s “Ang Huling Cha-cha ni Anita,” the director said: “There’s no point of comparison at all … I’ve always wanted to do an LGBT film that doesn’t stick to the formula; with characters who are cool, fully-functional and not just punchlines.