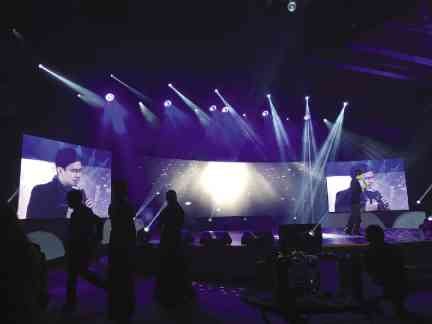 On Sept. 5, 1976, the Philippine International Convention Center (PICC) opened its doors, and served as the premier venue for conventions, exhibitions and concerts. Exactly 40 years to the day, the PICC celebrated its birthday by giving out awards to their faithful partners, clients and employees.

At the Reception Hall, the awardees and guests were treated to wonderful food and drinks (yummy!) taken care of by Via Mare.

Denise Laurel was in charge of hosting the event, with Christian Bautista serenading the awardees, and signaling the start to each award section with a new song.

Just so you know, he sounds and looks like a million bucks, his voice still crystal clear. He’s grown to be such a confident performer, and it was a sincere pleasure to watch him and cheer him on.

As was Denise. The last time I actually got to hear her sing was when she was a celebrity contestant on “Your Face Sounds Familiar” (she was the eventual champion of the show’s second season) imitating me. She was just incredible!

On this night, not only was she the host—she also had to sing a tribute to the PICC Gem Awardee … who happened to be me. She didn’t have to worry though; she did such a beautiful job and, along with the video presentation behind her, made me feel very proud.

When you care well

On Saturday, The Carewell Community Foundation celebrated its 10th anniversary with an intimate concert at the Manila Polo Club by yours truly and maestro Ryan Cayabyab.

Carewell (short for Cancer Research and Wellness) is the brainchild of the late Dr. Jackie Fernandez-Suntay and her husband, Robert Suntay—as Jackie was undergoing treatment for ovarian cancer in the United States.

Based on the model of The Wellness Community, Carewell is there for cancer patients and their families, giving them information and, most importantly, hope.

As part of the show, I sang Carewell’s theme song, with music written by Nonong Buencamino and lyrics by Floy Quintos  and the late Marilou Diaz-Abaya. This, better than any brochure, sums up what Carewell is about:

Though you may not take the pain away/ But bit by bit, and day by day/

More power to you, Carewell Community … The world is a better place because of communities like yours!

Due to quite a few of my friends from “The Voice” and life being part of this, allow me to shamelessly plug ABS-CBN’s newest offering, “Pinoy Boy Band Superstar (PBBS).”

Oh, pass the popcorn, this is going to be fun!