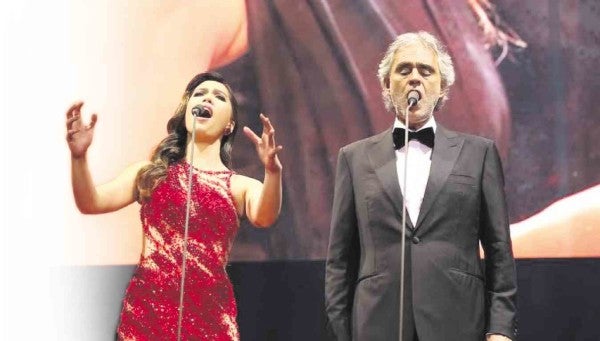 Andrea Bocelli barely talked, but had a ready and reassuringly genteel smile. The first time he broke into one, he was being led by the night’s conductor, Carlo Bernini, to the stage; the singer, hearing the hearty reception from the well-heeled crowd, beamed—almost shyly—and it exuded an uncanny warmth and a sense of calmness.

Feeling the microphone in front of him, the tenor gave a slight nod to Bernini, who, in turn, set into motion the ABS-CBN Philharmonic Orchestra, which earlier set the tone with a spirited performance of “Les Toreadors,” from Bizet’s “Carmen.” And when at last he opened his mouth to sing “O, Paradiso” from Meyerbeer’s “L’Africana,” the fans, who trooped to the SM Mall of Asia Arena for this recent concert (MMI Live), was promptly reduced into murmurs and sighs.

The first half of the show was dedicated to excerpts from various Italian operas, mostly by Puccini and Verdi. For the most part, the audience—composed of older music lovers, celebrities, foreigners and businessmen—was politely appreciative, showering Bocelli with applause after each stirring performance of slow-burning songs of love.

But every so often they went out of their way to cheer and holler, especially when Bocelli tackled more familiar pieces, as in the charming “La donna è mobile” from “Rigoletto” and the lively “Libiamo ne’ lieti calici” from “La Traviata.”

Joining the orchestra in providing a lush accompaniment to Bocelli was the Ateneo Chamber Singers, which regaled with a haunting interpretation of “Va, Pensiero” from “Nabucco.”

The Mexican lyric soprano Maria Katzarava, on the other hand, showcased nimble vocal flourishes in a duet with Bocelli of “O soave fanciulla” from “La Bohème.”

Bocelli’s voice, while consistently ear-pleasing and heart-tugging, is not without faults: His vibratto, at times, was dispensed in slow, undulating curlicues, instead of tight, rapid currents; and when he ascended to his upper register, he did not quite have that booming resonance that tingles the spine.

Nonetheless, Bocelli’s voice has an inherent beauty and purity that cannot be denied, one that unfailingly echoed a quiet intensity and earnestness. His singing likewise possessed a lyrical quality that made opera songs a tad more accessible.

And such strengths were more pronounced in the second, more pop-ish half of the show, which had the classical crossover artist rendering movie themes that he recorded for his latest album, “Cinema.”

At this point, the fans were noticeably more engaged and animated, even singing along to such songs as “Maria” from “West Side Story” and “The Music of the Night” from “The Phantom of the Opera.”

Meanwhile, in the Sicilian ballad, “Brucia la terra,” from the third installment of “The Godfather,” Bocelli was accompanied by  flutist Andrea Griminelli, as scenes from the iconic film flashed on the screen.

In the show’s final stretch, the statuesque Christine Allado, a Filipino singer-actress in London’s West End, held the crowd captive with an elegant and emotive essaying of the songs, “As If We Never Said Goodbye” and “One Day I’ll Fly Away.” Later on, she shared the spotlight with Bocelli in a lighthearted duet of “Cheek to Cheek.”

“Just like this!” the 57-year-old recording artist, who turned completely blind when he was 12, quipped, as he pressed his cheek against Allado’s, showing a little of his good-natured humor that elicited laughter from the crowd.

For his encore, Bocelli saved the big one: the heroic aria “Nessun dorma,” from “Turandot.” And as expected, the mere opening strains of the piece had everyone gasping and hoisting their cameras to make sure they capture what would turn out to be the concert’s most shared moment.

The music—augmented by the choir—simmered as Bocelli built up toward the dramatic climax, which he pulled off with ample aplomb.

The glory note, although bereft of the heft and freedom showcased by Luciano Pavarotti in his legendary rendition, was solidly hit and securely sustained.

For that show-stopping number, Bocelli was duly rewarded with a  standing ovation. Then, sensing the crowd’s heightened excitement, Bocelli, once more, broke into a smile—this time, a little wider.