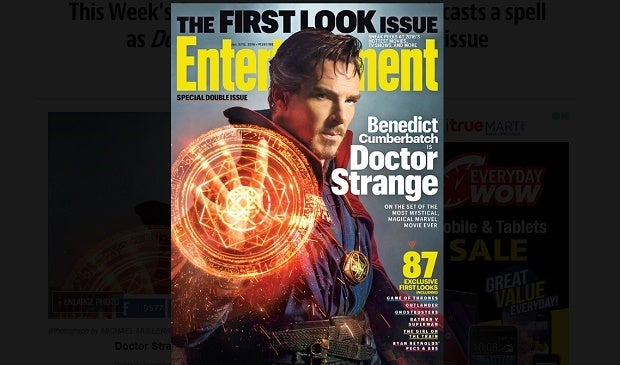 Fans of Benedict Cumberbatch and of Marvel’s ‘Doctor Strange’ are in for a treat as Entertainment Weekly gives them a peak of the actor in the character’s costume. EW.COM SCREENGRAB

The latest issue of Entertainment Weekly (EW) has unveiled the first look of Benedict Cumberbatch as Doctor Strange, a treat for Marvel fans as the movie won’t be shown until November next year.

The exclusive photos were of the first time that the actor tried on the costume of his character, a doctor with magical powers.

“I’m still in the infancy of learning all that,” Cumberbatch told EW. “It was like, okay, I’ve got to keep throwing these poses, these spells, these rune-casting things, everything he does physically. I’m thinking, there’s going to be a huge amount of speculation and intrigue over the positioning of that finger as opposed to it being there, or there. And I’m still working on that. We haven’t played any of those scenes yet. I felt really self-conscious. But, then, by the end, it was great. It’s like anything, you just have to experiment.”

Check out the photos: