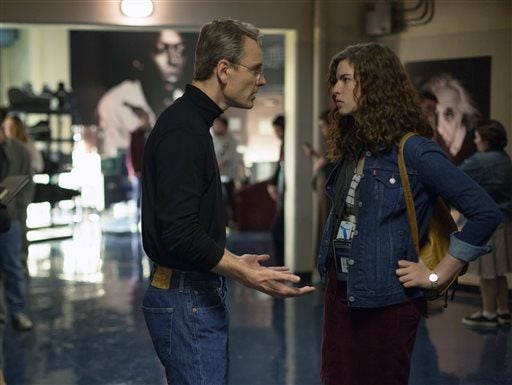 When is someone going to open a window in Aaron Sorkin’s “Steve Jobs”? Alas, wrong operating system.

Sorkin has dispensed with the traditional format of the biopic, instead framing the life of the Apple co-founder and turtle-necked tech deity in three backstage dramas ahead of major product launches: the Macintosh in 1984, NeXT in 1988 and the iMac in 1998. In the behind-the-scenes swirl, Jobs (Michael Fassbender) is visited each time by ghosts of products past: Apple engineer Steve Wozniak (Seth Rogen), Apple CEO John Sculley (Jeff Daniels), and Jobs’ daughter, Lisa (played by three actresses), whose paternity Jobs initially disputes.

It’s a scheme of three-act purity, as tightly compacted as the circuitry of an iPod, and one that few besides Sorkin would dare to attempt.

Though the script is adapted from Walter Isaacson’s book, it feels more like a play that director Danny Boyle has transferred to the screen. The stage must be the true home of “Steve Jobs”; no one steps outside until a pivotal moment late in the film.

Like the tightly controlled aesthetics of Jobs, himself, the movie is a closed system. Even in the first scenes, Jobs is trying to have the “Exit” signs covered for the show. Tell the fire marshals, he says, “We’re in here changing the world.”

Cloistered inside its claustrophobic casing, the movie hums with the high processing capacity of Sorkin’s dialogue. In dressing rooms and the bowels of theaters, Jobs, flanked by his right-hand woman Joanna Hoffman (an excellent Kate Winslet), is the egomaniacal mind amid the media storm of his making.

He’s in virtually perpetual argument: strong-arming his engineers to get the first Mac to say “Hello” in his presentation; lamenting a Time magazine cover that dared to make the computer, not him, man of the year; sneering at PC “hobbyists” who resist the “end-to-end” control he demands for the Mac.

What does Steve Jobs do? That’s the question Wozniak (the arguably more important inventor and computer programmer), puts to him, and the one the film, itself, is an answer to. Jobs is the big-picture visionary, the bullheaded narcissist and, above all, the knowing conductor of talent and ideas. It’s not a hard metaphor to grasp by the way Sorkin, the master of multitasking, juggles Jobs in an asteroid storm of turmoil, including, oh yes, one scene set in an orchestra pit.

Every interaction bears the tension of tolerance: How much do we accept from a man of some genius? It’s not much fun being around a guy who compares himself to Julius Caesar and sees assassins all around. How to reconcile someone who can refuse to pay for his daughter’s college tuition, but who can, like magic, put a thousand songs in her pocket?

He’s as puny as he is mighty, a flawed man who made perfect machines.

“Steve Jobs” hangs heavily, melodramatically, on his relationship with Lisa. But as fraught as life is backstage, the thundering, foot-stopping audiences lurk outside.

Why has Sorkin, an acknowledged technology neophyte who also penned “The Social Network,” become the go-to for some of the greatest tech minds of our time? Perhaps because his rat-tat-tat exchanges gives us some sense of the computing power of elite minds, just as his morality tales render them in the binary codes of good and bad rather than ones and zeroes.

Boyle, whose greatest talent is in his slick manipulation of time (“127 Hours,” ”28 Days Later…”), is in firm control of the screenplay’s high-velocity rhythm. And he does his best to bring a visual component to the stagy screenplay, most notably filming each act different: first grainy 16mm, then 35mm and finally in the hard reality of high-definition digital.

The adventurous Boyle feels a little hemmed in here, as does the naturally mischievous Fassbender. But Fassbender captures the thin-skinned sensitivity and detailed obsessiveness of Jobs. In his hands, Sorkin’s dialogue crackles.

The film often does too: the Full Sorkin Treatment has electrified a well-trod subject. But it also smothers it in artifice. In “Steve Jobs,” Sorkin does the conducting.

“Steve Jobs,” a Universal Pictures release, is rated R by the Motion Picture Association of America for language. Running time: 122 minutes. Three stars out of four.