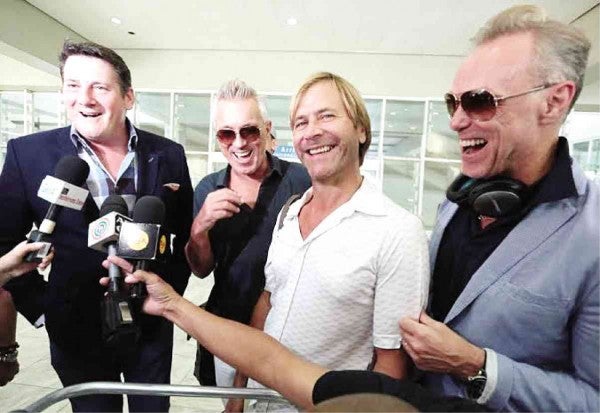 FEELING the chemistry and watching the interplay among the men of the English New Wave band Spandau Ballet, one wouldn’t think that they only started sharing the stage again recently, 20 long years after their rancorous falling out.

From the moment Tony Hadley (lead vocals), Gary Kemp (guitar), Martin Kemp (bass), and Steve Norman (saxophone) kicked off their concert at SM Mall of Asia Arena, it was apparent that the ill feelings had already been brushed aside—that they’ve reunited purely because they wanted to recapture the magic of their halcyon days.

Looking dapper in a suit, Hadley danced around the stage, volleying the energy back and forth with his bandmates, as he dished out fan favorites like “Highly Strung,” “Only When You Leave” and “Round and Round.” He was equally exuberant in tackling some of the group’s more recent works, including “Soul Boy” and “This Is the Love,” which could very well pass off as early Spandau material.

Sturdy and robust, Hadley’s voice remained a potent instrument—“almost exactly like what it was back in the day,” remarked not a few fans around us, as the singer tackled demanding vocal passages. Norman, meanwhile, was just as electrifying as a performer, taking center stage from time to time for stirring and sultry saxophone solos that had him swaying his body and leaning back whenever he went for an emphatic note.

Drummer John Keeble failed to make it to the concert (mounted by Ovation Productions) because of an illness he was still recuperating from. While his absence was a disappointment to some, it didn’t put a dent on everyone’s enjoyment, many thanks to substitute drummer Sterling Campbell’s masterful command of the skins.

In one of the show’s more subdued numbers, Hadley and Gary Kemp hopped on the b-stage for an acoustic rendition of “Empty Spaces” and a brief sing-along session of “Gold,” which was nothing more than a teaser for what Spandau had prepared for the fans, whom the guitarist later described as some of the most “beautiful, lovely people in the world.” 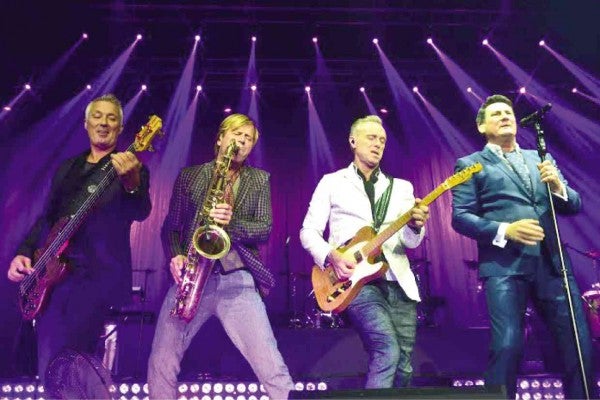 Replete with glossy, funky 1980s synths, the medley of “Age of Blows,” “Mandolin,” “Confused,” “The Freeze” and “Reformation”—all from the band’s first album “Journeys to Glory” was another highlight; a homage of sorts to the group’s days in the famous London nightclub Blitz, where it spearheaded the New Romantic movement.

Some people had been already raring to dance since the night’s third song, but much to their annoyance, they were ordered to sit down by the exaggeratedly strict security team. But there was nothing the burly bouncers could do, however, when almost the entire audience rose to its feet and moved to the beat when “Lifeline” came on.

As expected, Spandau’s two most popular hits were saved for last. The fans sang and waved their lighted cell phones aloft as the band played the enduring R&B-inflected pop-ballad “True.” “Beautiful, beautiful, beautiful,” the whiskey-sipping Hadley told the crowd.

Finally, the band gave the fans what they’ve been waiting for all night. “We’ll leave you with this,” Hadley said, before bringing the house down with a rousing performance of “Gold.” “Are you ready?” the vocalist roared as he dropped the song’s first chorus. After which, the 50-something members—like giddy teenagers once more—huddled and hugged each other, laughing and jumping up and down, as the crowd feted them with a chorus of cheers and shrieks.

“You’re indestructible!” the song went. It wasn’t quite the case for Hadley, Norman and the Kemp brothers, as we all know. But on that night, at least, they seemed like it.