Maria Ozawa: Blaming me for Mariel’s miscarriage is wrong 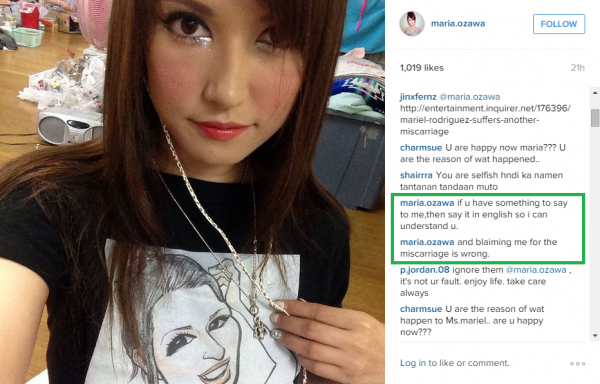 Ozawa’s post, a photo of her wearing a fan-made shirt with her face printed on it, was heavily bashed by netizens claiming that she was the reason why Rodriguez lost her triplet pregnancy.

“If you have something to say to me, say it in English so I can understand you,” she added.

It can be remembered that Ozawa called Padilla “unprofessional” after the latter backed out of their horror movie project ten days before shooting date.

Padilla, who admitted that his camp was at fault, said he quit the project to focus on his wife’s pregnancy.

In March, Rodriguez suffered her first miscarriage when she was eight weeks and three days pregnant. YG/IDL