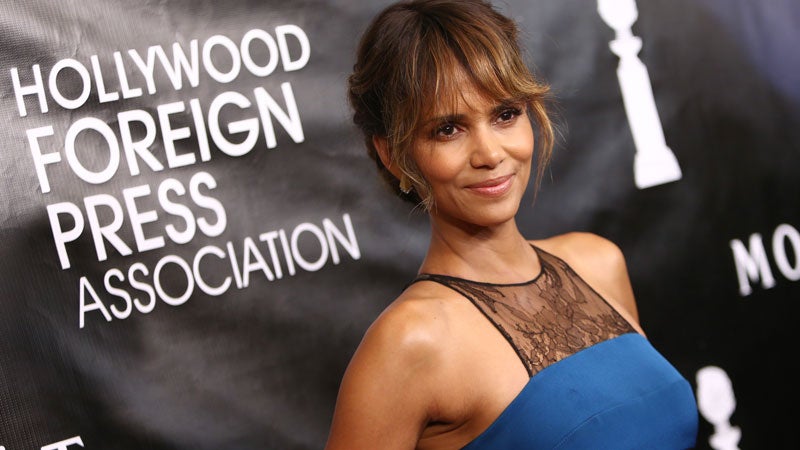 Gaga, Berry and Blunt were among dozens of celebrities appearing at a private dinner Thursday to read awkwardly from a teleprompter about the nonprofit arts organizations benefiting this year from $2 million in Golden Globe show spoils. The HFPA hosted a 90-minute star parade at the Beverly Wilshire Hotel, as one actor after the next came up to read about the 55 grant recipients.

The event isn’t televised, so there’s room to go off script or use profanity. The first presenter, Jamie Lee Curtis, set the tone for the evening when she did both.

“If you want to have a party, and you want to give away $2 million, Lady Gaga is going to come to the (expletive) party,” Curtis said.

“When Jamie Lee Curtis said my name, I snarfed an olive into my nose,” the singer said. “And a little, tiny piece of it is still there.”

Berry apologized that she had trouble reading the teleprompter without her glasses, and revealed her age was to blame.

When Blunt and del Toro missed their cue to take the stage, Jane Fonda got laughs with her ad-lib.

“You know Benicio, he does seem a little bit unreliable, doesn’t he?” Fonda said. “You look into his eyes — really interesting, maybe not so reliable. But Emily Blunt, you would think she’d show up on time, right?

“I don’t think they’re off making out somewhere,” Fonda continued. “This is really funny! I have no idea where they are.”

When the two stars made it to the stage, Blunt confessed that she couldn’t see the teleprompter at the back of the room and repeatedly asked del Toro for his help.

The HFPA has long shared a portion of its awards-show earnings with schools, arts organizations and film restoration projects, and stars often unconnected with those groups accept the grants on their behalf. The HFPA has donated more than $23 million to date, including $2 million for a new media arts center at Los Angeles City College.

Isaacs joked that he misunderstood when he initially got a phone call from the HFPA asking him to give money.

“I thought, ‘I didn’t think that things worked like that anymore, but whatever it takes.’ And it turns out it’s to give money away,” he said. “What kind of people would put on a TV show in Hollywood, make a (expletive) of money and give it all away? Only foreigners.”