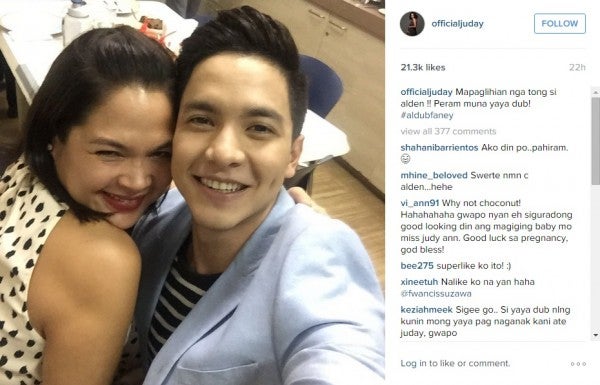 It looks like even actress Judy Ann Santos-Agoncillo has been affected by the “AlDub” fever.

Alden now enjoys overwhelming fame because of his stint in “Eat Bulaga’s” hit noontime segment “Kalyeserye” which has become a television phenomenon during the past few weeks.

Judy Ann also referred to “Yaya Dub,” a character being played by Nicomein Dein Mendoza who is the love interest of Alden in the series.

Judy Ann is currently pregnant with her second biological child with husband and host-actor Ryan Agoncillo. They have two other children—adopted daughter Yohan and firstborn Lucho. Ryan is Alden’s co-host in “Eat Bulaga.” AM/IDL