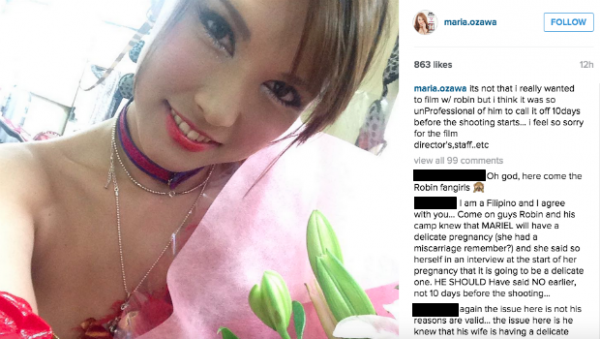 Former Japanese adult film actress Maria Ozawa took to social media her disappointment upon learning that actor Robin Padilla has backed out of their horror movie project which was included as an entry to the 2015 Metro Manila Film Festival.

In a post on her Instagram account Tuesday night, Ozawa said that Padilla was “unprofessional” for pulling out of “Nilalang” 10 days before they were supposed to start shooting.

“Its not that I really wanted to film w/ Robin but i think it was so unProfessional of him to call it off 10 days before the shooting starts…, ” Ozawa said, unedited.

READ: Robin Padilla backs out of movie with Maria Ozawa

She said that she feels “sorry” for the film director and its staff.

In an Instagram post by Padilla’s manager Betchay Vidanes on Tuesday, she said that the actor decided to quit the project to focus on the pregnancy of his wife, Marielle Rodriguez.

“I would like to let you know that this decision making process has been very hard as Mr. Padilla’s reputation shows that he has the highest regards for those he commits to work with. His withdrawal is due to the fact of needing to attend to his wife Mariel [Rodriguez], as she is experiencing a delicate pregnancy,” Vidanes said.

The couple is expecting triplets.

Padilla is yet to respond to the post of Ozawa.

READ: Robin Padilla reacts to Maria Ozawa comment: Our camp is at fault

Meanwhile, Inquirer reported that MFT Group said that it will no longer finance the production of Nilalang.

“Given the proposed working budget for the film, the nonparticipation of Mr. Padilla means that MFT (being the main funding partner of Haunted Tower Pictures) no longer believes that the project has a bankable actor as its lead and the absence of immediate alternative means that the production will be delayed to an extent that (it) will be released in time for the 2015 Metro Manila Film Festival,” Joyce Ramirez from MFT said.

Nilalang would have been Ozawa’s first mainstream film project in the Philippines. AJH/IDL