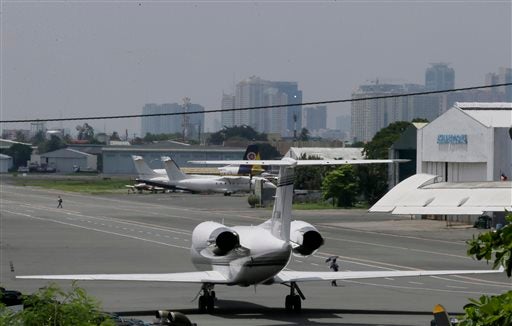 A Gulf Stream private jet chartered by Grammy award-winning singer Chris Brown sits at the end of a taxiway housing private hangars of the Manila Domestic Airport in Pasay City on July 23. Brown, who performed at a packed concert on Tuesday night, was barred from leaving the country following fraud allegations against him and his promoter for a canceled concert last New Year’s Eve in the Philippines. AP

American singer Chris Brown may now leave the Philippines after securing an emigration clearance certificate (ECC) on Friday afternoon from the Bureau of Immigration.

Bureau spokesperson Elaine Tan said Brown personally appeared before the immigration office in Makati City to apply for an ECC at 4 p.m. She said his application was granted.

“ECC issued by BI Makati office around 4:30 p.m. today after verifying that Chris Brown has no other derogatory record apart from the [immigration lookout bulletin],” said Tan, adding “departure formalities” would be implemented by immigration officers at the airport.

According to Immigration Commissioner Sigfried Mison, Brown has no derogatory record despite the complaint filed by Maligaya Development Corp.

The $1-million estafa complaint, he said, was still with the prosecutors’ office, “so based on our lookout bulletin, directive ni ma’am (Justice Secretary Leila de Lima), it is not a basis to deny departure.”

He also said there was no agreement for Brown to return to the country in case he needed to appear in court.

“It is really a matter between the lawyers of Mr. Brown at yung kanyang promoter and the [National Prosecution Service],” Mison said.

However, if the case would be filed in court, De Lima said the government had recourse to go after Brown like extradition and the Mutual Legal Assistance Treaty.

Brown has been barred from leaving the country after being put on the watch list of the immigration bureau.

The singer staged a concert on Tuesday night at SM Mall of Asia Arena in Pasay City.

Brown is expected to leave the country via his private jet anytime today. His next destination is Macau.