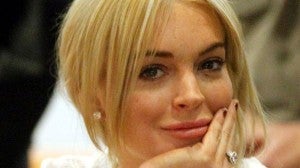 Earlier this month a judge warned her she could face prison time if she failed to complete the sentence within three weeks. She had only completed about nine of 125 hours at that time.

“I believe she has successfully completed her community service obligation to the court,” said Santa Monica prosecutor Terry White on Wednesday.

Lohan, who has been living in London, carried out the service in New York at a children’s community center.

Last week the 28-year-old posted a photo on Instagram of a castle-like play area built at the center using large blue blocks, and wrote: “We built this for the kids today! So cute!!”

Lohan was sentenced in 2013 to 240 hours of community service after she drove recklessly and lied to police following a 2012 car accident in Santa Monica, California.

READ: Lohan probation in jeopardy after rehab departure | Lindsay Lohan says her troubled past is behind her

But in February she was given another 125 hours of community service, after a judge questioned whether she fulfilled the terms of the initial sentence.

After rocketing to stardom for films “The Parent Trap,” “Freaky Friday” and “Mean Girls,” Lohan has been in and out of rehab with drug problems and has had numerous encounters with the law.