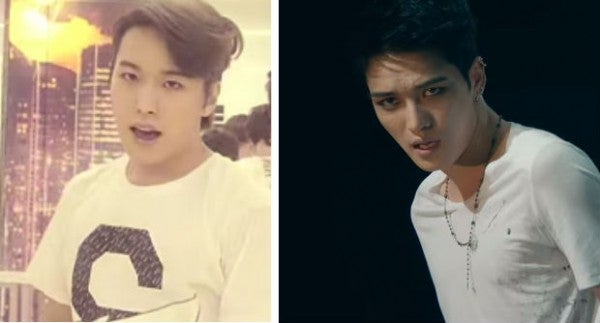 JYJ’s Jaejoong and Super Junior’s Sungmin both enlisted in the Army Tuesday for their mandatory military service.

Jaejoong made a low-key enlistment. It is not known where he will receive his weeks-long training before entering active military duty.
He will be discharged from service 21 months later on Dec. 30, 2016.

The 29-year-old singer-actor previously bid farewell to his fans at the two-day concert “The Beginning of The End” at Korea University in Seoul.

Ticket prices for Sunday’s show soared to as much as 1 million won ($903) due to avid fans who wanted to capture his last moment before enlistment.

Shortly after his enlistment, Jaejoong will release his second solo studio album, but an exact release date is yet to be confirmed.

Meanwhile Sungmin, who also joined the army Tuesday, is the first idol male singer who is married and was accompanied by his wife — musical actress Kim Sa-eun — on his send-off.

“Kim would see her husband off to the army. He is going to enter the training camp quietly, accompanied with his family,” a source close to Sungmin told a local media outlet Monday.

Sungmin and Kim were married in December after they first met during the musical “The Three Musketeers,” playing d‘Artagnan and Constance, respectively.

On the day, several fans and media outlets were waiting to see him off, but he quietly entered the training camp without any special fanfare.

In Korea, all able-bodied men aged between 18 and 35 are required to serve about two years in the military to deter threats from North Korea.

Read Next
Will the real Jolina Magdangal please stand up?
EDITORS' PICK
National COVID-19 vaccination drive gets over 5.3 million people vaxxed so far
This new condo in the South will make you want to turn a new leaf
Pandemic prognosis: Where does it go from here?
Google won’t accept election ads for 2022 national polls
Legarda: Ending Violence Against Women, a cause for all
Smart offers wireless fiber-like speeds to Filipino homes with country’s first 5G Prepaid Home WiFi
MOST READ
Bongbong Marcos to face another disqualification case
Christine Bersola, Julius Babao cleared of cancer after colonoscopy, endoscopy
‘Maraming nagpapagkamatay sumali’: Bongbong-Sara’s full Senate slate out soon, says Imee
Tropical storm intensifies as it approaches PAR
Don't miss out on the latest news and information.