Albert: I feel lost without Liezl 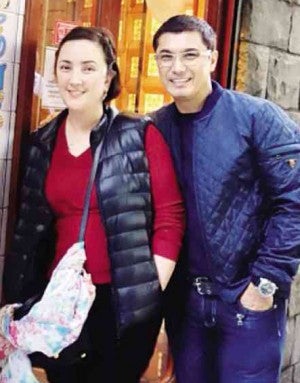 Actor Albert Martinez vividly remembers that dreadful Monday, March 9: His wife, Liezl Martinez, had suffered a seizure. He was on the set of Joel Lamangan’s latest film, “Sugo,” in Laguna, when he received the call. He left in a huff.

On the road, he phoned mother-in-law Amalia Fuentes and a few other relatives and asked to meet them at the hospital, where his son Alfonso and Liezl’s cousin Arlene Muhlach had taken his wife.

Last September, doctors delivered grim news: Liezl’s cancer had spread to the liver and stomach lining. “She survived cancer twice; this new one was aggressive.”

Liezl fought till the end, Albert told the Inquirer in a phone interview on Wednesday. “She had so many dreams still for our family. She wanted us to see our grandchildren. She looked forward to Alissa’s graduation in June.” Alissa, youngest of their three children, just finished her MBA program at the University of Asia and the Pacific.

After Liezl died on March 14 due to multiple organ failure, her family found her last will and testament, which she had written in 2010, in their safe at home.

“She left detailed instructions,” Albert related. “We followed every one of them.”

Liezl was the “systematic” one between the two of them throughout their almost 30-year relationship. “She planned everything to the last detail. She would even make a PowerPoint presentation sometimes.”

She was so organized, Albert said, that “she got to schedule a chemotherapy session before she left for the United States last December and resumed the treatment upon her return in January.”

Although doctors advised against it, the headstrong Liezl traveled to California with Alissa. It was a sentimental journey.

Albert narrated, “In San Francisco, she went to our first house, where we lived when we were still struggling. She dropped by our second home, too, and visited all our friends there.” From San Francisco, she proceeded to Los Angeles and met up with her father, actor Romeo Vasquez.

She visited Disneyland and Warner Studios and watched “Ellen” during that episode when all the audience members were given American Airlines tickets to any destination in the airline’s route, plus a five-day hotel stay. “We haven’t decided what to do with that,” Albert told the Inquirer.

From LA, Liezl took a road trip to Las Vegas, to spend the holidays with cousin Aga Muhlach. “She was like saying goodbye to everyone,” Albert noted.

He said he helped his wife tick off items on her bucket list: “We went bungee-jumping in Norway, scuba diving in Palawan… the only thing we didn’t get to do was skydiving. We were scared to die mid-air!”

With either Albert or the kids, she traveled to Spain, France, Italy, Japan, Korea, Cambodia, Australia. In the end, though sick, she managed to start a home renovation project. “Sadly,” Albert said, “she wouldn’t see it finished.”

Coming home from work without Liezl at the door would take some getting used to, he confessed. He has asked Alyanna to move back. “She has her own place. When she gets married, she can [move out again]. I feel we should stick together as a family at this time.”

That’s why the scene at the cremation ceremony on Monday pained him. (Feeling ignored, Amalia stormed out.) “We never intended to leave anyone out,” Albert said. “We just saw to it that Liezl’s directions were followed. Now, we need to support one another.”

In her last days, Liezl, who would have turned 48 on March 27, kept her sense of humor, said Albert. “I would kiss her and she would pucker up, make funny faces.”

She was his “treasure,” he said. “She was my best critic, too, constantly reminding me to take care of my skin, making sure my clothes matched. She insisted that I take breakfast every day, and made sure I took my vitamins.” He wondered who would do all these for him now.

“We were together, almost every day, for 29 years. Suddenly, she’s gone. I feel lost.”