Rihanna: A guy has to be man enough to put up with my sked | Inquirer Entertainment
Close
menu
search

Rihanna: A guy has to be man enough to put up with my sked 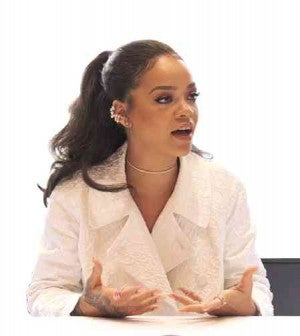 A FAN of Mariah Carey, Celine Dion and Whitney Houston, Rihanna says she wanted to make music that could be heard all over the world. photo by Ruben V. Nepales

LOS ANGELES—“How would the name Rihanna DiCaprio sound?” The seven-time Grammy winner smiled at this question based on reports that she and Leonardo DiCaprio are dating. She then replied, “Stay off the blogs and tabloids. They will screw you every time.”

Rihanna was a welcome sight in bright white—jacket, skirt and flat shoes, and diamonds, lots of them on one ear—on this recent cold, wet day in New York. The breathtaking view of Manhattan from the 36th floor of Mandarin Oriental Hotel was no match to this Bajan music superstar.

The 27-year-old singer, who dated Chris Brown and Drake, set the condition for the potential new man in her life: “If he could tolerate my schedule right now—if he’s man enough to not get scared (laughs)…I don’t have a lot of time to offer to a man right now. It’s not fair to pull anybody into this.”

“You can imagine being on tour,” added the woman who was born Robyn Rihanna Fenty in Saint Michael, Barbados. Her dark hair was pulled into a ponytail. “I tour for a year at a time sometimes. You are just on a tour bus for months and months. It does get lonely.”

Rihanna said that helped her identify with Tip, the girl she voices in the animated road trip movie “Home.” Tip and Oh (Jim Parsons), a misfit from another planet, become friends, spending a lot of time in a car as they search for her mom.

“I do identify with the feeling of being stuck, maybe in a vehicle,” said Rihanna, who does a good job in her first animation voice acting (so does Jim). At least she has a tour bus, Rihanna noted. Tip, who is Bajan like her, is cooped up in a car with Oh and her pet cat named Pig.

“Everybody knows what’s it like to close the door at night and it becomes silent,” the glamorous performer said.

But Rihanna claimed that even when she finally gets off that tour bus and comes home, she still leads a “boring” life. “There’s a very big misconception about what I do when I am at home. I just watch TV and lie on the couch. I am so boring.”

She clarified, “But outside, I am spontaneous. I love to do things—go out, see things, travel. The world has so much to offer that there’s never enough time.”

What does the top-selling digital artist of all time (she has sold a staggering 200 million digital tracks worldwide) watch? “Reality TV—that is awful,” she answered with a grin. “Movies. I love documentaries. Late at night, I watch only cartoons because I don’t want to get scared (laughs).”

Rihanna’s experience on “Home,” which also features the voices of Jennifer Lopez and Steve Martin, makes her want to do more movies, “if I have the time.” Said the most-viewed artist on Vevo/YouTube, “I did love… animation voice acting. It was way different from doing something like ‘Battleship’ (her 2012 movie). I want to act again, especially in animation. And I want to do it with Tim (Johnson), the director, again. He is such a great director. That’s what made this work for me. I knew nothing about voicing a character.”

Rihanna is grateful that a girl from Barbados like her could move to the United States and become a singer who has sold 53 million albums. “I believed it so much, that it happened. It was so far from even being possible. In hindsight, I [realize] that was a really big dream.

“When I was younger, I listened to Mariah Carey, Celine Dion, Whitney Houston, Destiny’s Child. Those were the big voices I listened to, among other things like reggae and hip-hop. I wanted to sing and be heard all over the world.”

Barbados’ most popular music export said she’s still very much a Bajan at heart. “Everything—school, home, culture—there’s that foundation built for 16 years before I moved to America. I have always stayed close to my family, friends and people from home. It is a part of me and part of the film—Tip’s accent and attitude.”

She credited her burning ambition and passion for music for her success. “When I moved to America, I was very ambitious,” Rihanna admitted. “I still am. Whatever outlet I can find that I love and can be creative in, I home in on it—whether it’s designing, music or animation.”

Two women, specifically, inspired her. “I was very blessed to be born into my family. My mother and grandmother are both very strong women. I was lucky to them in my life.”