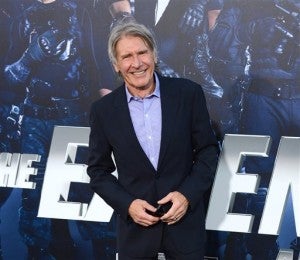 FILE – In this Aug. 11, 2014 file photo, Harrison Ford arrives at the premiere of “The Expendables 3” at TCL Chinese Theatre in Los Angeles. Just weeks after he crashed a vintage airplane on a Los Angeles golf course, Ford will return to the skies – or his voice will at least. National Geographic Studios announced Thursday, March 19, 2015, that Ford will narrate a documentary being released next month called “Living in the Age of Airplanes.” (Photo by Jordan Strauss/Invision/AP, File)

LOS ANGELES— Harrison Ford, who recently crashed his vintage airplane on a Los Angeles golf course, is returning to the skies — at least with his voice.

National Geographic Studios announced Thursday that Ford will narrate a documentary being released next month called “Living in the Age of Airplanes.”

The giant-screen film that was shot from the air over 18 countries gives a history of a century of aviation.

The film premieres April 8 at the Smithsonian’s National Air and Space Museum in Washington and two days later will open on IMAX and similar screens.

The announcement comes as Ford, a longtime pilot and aviation enthusiast, is still recovering from the March 5 crash-landing of a World War II-era plane whose engine failed shortly after takeoff.