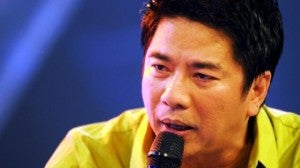 Willie Revillame is slated to make his comeback via a weekly game show on GMA 7. INQUIRER FILE PHOTO

MANILA, Philippines–Willie Revillame is back with GMA 7.

The television host on Friday morning inked a deal with the Kapuso network for his coming weekly variety-game program “WowoWin,” according to tweets posted on GMA 7’s official Twitter account. The new show, set to air every Sunday, will be directed by Revillame’s friend Randy Santiago.

“Dito naman talaga ako nagsimula…I’m back where I truly belong,” Revillame was quoted as saying during the contract signing, which was attended by GMA 7 chairman and CEO Felipe Gozon and other execs.

In a previous interview with the Inquirer, Lilybeth Rasonable, vice president for entertainment television group, clarified that Revillame will be a blocktimer. “His show won’t be produced by the station,” she said.

Willie Revillame not getting poor at all