MANILA, Philippines—Megastar Sharon Cuneta, fresh from her major comeback to ABS-CBN, confessed that she regretted leaving the Kapamilya network.

“I regretted because now naturally I felt like a fish out of water,” Cuneta told host Boy Abunda on Sunday in a tell-all interview on showbiz talk show The Buzz.

“I really felt like ‘oh yeah now I can breathe again, I’m back in the ocean.’ You know you get to a point that you keep on trying and trying. I think I became too complacent. I became very lazy .I couldn’t even get to the point of pushing myself to lose weight because I was too complacent,” she said. 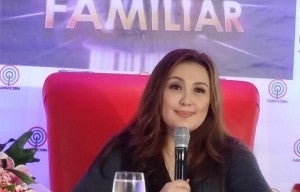 She also said that now she’s in a very happy place because she is coming home from a place of humility.

“I have been disappointed millions of times in my life. But I have never ever allowed myself to feel defeated. Defeated is different thing. I am not defeated, I’m idle. That is what I’m telling myself,” she said.

“I had a good career going and like most people, we sometimes make decisions that we think are good at a certain time, and sometimes they are based on simple nonsensical things like a tampo. And I know I should have just talked to whoever [I had] a tampo with here [in ABS-CBN],” she added.

She also remembered seeing a van of ABS-CBN in the streets and felt heartbroken because she didn’t feel like she belonged anywhere else.

“Noong wala ako I don’t wanna talk about other people. Ako lang to. Sabi ko nga parang ‘your feet may leave home but your heart stays’,” she said.

Cuneta also shared she had a secret meeting with the network’s executives last August and she didn’t know what it was for.

“Sabi ko baka catching up lang kasi ang tagal namin di nagkita. And then we started talking about shows and movies,” she said.

“I asked Tita Charo ‘So I’m coming home?’ and the answer was ‘Of course, that’s why are we here’,” she said tearfully.

“This is love. This is home. This is family. And like I said, I can breathe again,” she concluded.

Sharon Cuneta on her return to ABS-CBN: ‘God woke me up

Read Next
Paulo Avelino admits past romance with KC Concepcion
EDITORS' PICK
The Best Tech Gifts For The 2022 Holidays
Is it safe to talk politics again at family gatherings? ‘The Reconciliation Dinner’ shows us what that’s like
EDITORIAL: To a bike-friendly future
House energy committee chair Arroyo bats for cheap electricity
vivo’s coming to town to grant wishes with more holiday promos
Pagasa: Warm, sunny Sunday in most parts of PH
MOST READ
LOOK: Vhong Navarro transferred to BJMP detention facility in Taguig
The Elephant Man in the Senate
Posh village as ‘shabu’ haven
LOOK: Zanjoe Marudo bonds with Ria Atayde, her family
Don't miss out on the latest news and information.