Sharon Cuneta on her return to ABS-CBN: 'God woke me up' | Inquirer Entertainment
Close
menu
search

Sharon Cuneta on her return to ABS-CBN: ‘God woke me up’ 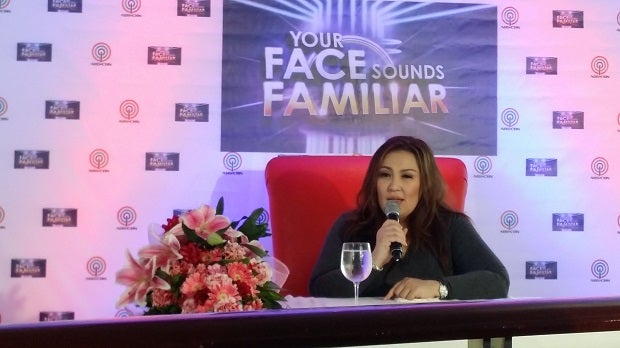 MANILA, Philippines — “My transfer wasn’t based on money, although I am happy that I’m being paid a good fee,” declared Megastar Sharon Cuneta, who signed a contract with ABS-CBN on Monday to become part of the reality show “Your Face Sounds Familiar.”

She clarified that the contract was “just for the show,” and added that her network bosses were still “determining what would be a good project for me. No doubt we’ll get there. We want to try different things. I also don’t want to be tied to a long-term contract.”

Sharon refused to reveal the amount of her talent fee, but said: “It wasn’t reduced. It really depends on the kind of show I am part of.”

She will sit in as a jury member, along with Gary Valenciano and Jed Madela, to critique the live performance of eight celebrity contestants who will impersonate popular local and international music icons in the show.

In 2012, Sharon signed a contract with TV5 that reportedly cost P1-billion. Her contract with the Kapatid network officially ended in August 2014, more than two years ahead of the original contract period that was supposed to expire in 2016.

During the media gathering on Monday at the ABS-CBN Compound in Quezon City, Sharon revealed that she left the Kapamilya network because she had had a “misunderstanding (tampo)” with the network.

“I learned that I should not rely on a bridge to tell the bosses how I feel. May tampo ako–this is the real reason I left. I now realize that it could have been fixed,” she said. “Why did I let go of that trust for a minute? I should have listened to what other party has to say. My tampo was a very tiny reason. When we all sat down, I realized that what I’ve been thinking all the while was wrong.”

Sharon added: “God woke me up. He made me realize that I have been too complacent. I’ve learned to appreciate every blessing that come my way. I now celebrate each and every blessing. Because of my experience, I don’t anymore make decisions without consulting God through prayers.”

Sharon Cuneta: I will be back in showbiz ‘sooner than expected’