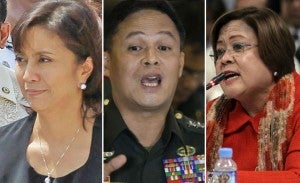 MANILA, Philippines–For the 34 Filipinas to wear one of the five crowns in the Binibining Pilipinas 2015, they have to impress one of the toughest women in the government.

Justice Secretary Leila De Lima is the chairman of the Board of Judges for Sunday night’s pageant.

Aside from De Lima, other government figures who are in the esteemed roster of judges include Armed Forces of the Philippines Chief of Staff Gen. Gregorio Pio Catapang and Camarines Sur representative Leni Robredo.

Other judges in the Binibining Pilipinas pageant include basketball player Kiefer Ravena and comedian Vice Ganda.

The pageant, which is hosted by actors Xian Lim and Toni Gonzaga, is still ongoing as of posting time. AJH

In photos: 34 Binibining Pilipinas candidates shine at Parade of Beauties