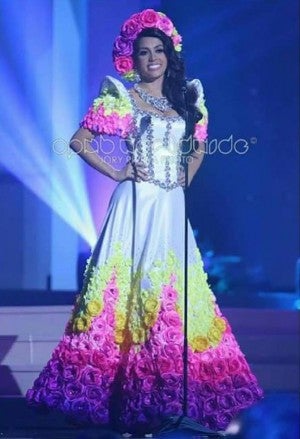 MANILA, Philippines–Homegrown designers now have a chance to showcase their designs in the world stage as the Binibining Pilipinas Charities Inc. announced that their creations will be considered for the national costume of the next country’s bet to the Miss Universe.

The announcement was made months after the national costume of Binibining Pilipinas Universe 2014 MJ Lastimosa during the Miss Universe 2014 competition earned the ire of netizens and Filipino beauty pageant aficionados.

Lastimosa’s gown, which was accented by yellow, violet, and pink flowers, was made by Colombian designer Alfredo Barraza.

Barazza, who designed the gowns and national costumes of the Philippines’ bets to the Miss Universe competition for years, was tapped by fellow Colombian and BPCI Chairperson Stella Marquez Araneta.

The North Cotabato beauty’s national costume and gown during last year’s competition were blamed by some Filipinos for her failure to land in the Top 5 of the said beauty pageant.

The Binibining Pilipinas 2015 is ongoing as of posting time. AJH