What Vina learned from Robin 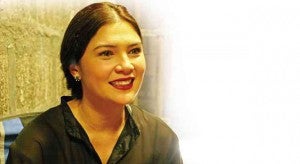 Vina Morales on the set of “Bonifacio”
KIMBERLY DELA CRUZ

Since Vina and I have a common denominator in Binoe (Robin’s nickname), we both had a good laugh during this interview.   It always feels good to look back and see how much you’ve grown and how you’ve outgrown things of the past.

Here’s my tête-à-tête with Vina:

How has Binoe changed since the last time you worked with him?

He has become a better person. He is still the same sweet gentleman but he now knows his limitations.

What’s the most important lesson you learned from Binoe?

To be down-to-earth, to love the crew and be kind to everyone.

Share some off-cam stories about you and Binoe during your shoot.

We had bonding moments over coffee. He’d always make lambing for coffee from me in my motor home. One time, we didn’t realize that the crew had left us on the set. We laughed like crazy. I won’t forget the moment when he asked forgiveness from me and told me that he is thankful that after we split up, I never spoke ill of him.

Tell us about your daughter.

Ceana is 5 and will be studying in a big school next year. I’m excited and nervous for her.

What kind of guy would make you want to fall in love again?

As we joyfully await the visit of Pope Francis in January, what better way to set the sacred mood than by listening to Jamie Rivera’s new CD, “We Are All God’s Children” (Star Records).

Even if Jamie is called the Inspirational Diva, she has a wacky side. I saw for myself how funny she can be during her show with Jeffrey Hidalgo in Dubai.

She may be pint-sized but her performance is power-packed.

Here’s my one-on-one with Jamie:

Are you more religious or spiritual?

I am an ardent follower of the Catholic church.

What’s your take on other faiths?

As my song goes, “We are all God’s children…” Religion for me is not an issue.

Tell us about your album.

What would you want to ask Pope Francis?

I would ask for a selfie and ask him to pray for our country.

What’s your song for yourself these days?

“We are All God’s Children” because it’s that time of the year… when we should help those displaced by Tropical Storm “Ruby.”

If you’re not content with the “content” of your gadget, Smart Communications will allow you to binge-watch, music-trip and book-hoard via Smart’s data services, plus mobile apps like Blink, Spinnr and Buqo.

Blink takes care of your viewing needs while Spinnr has the soundtrack part covered. And if you need to know the latest trends, Buqo’s reading selections offer perfect ideas. What a Crazemas!

Tri United 4, the last part of the Tri United (TU) series, produced quite an interesting lineup of winners, including newbies, celebrities and elite triathletes.

Among the first-timers in the triathlon held at Fontana Leisure Park in Clark, Pampanga, was Iya Villania-Arellano who topped the female 25-29 age group.

Iya’s husband, triathlete Drew Arellano, did not join the race, but cheered her on. “I trained in the last few months. I chose TU 4 as my first competition because of the friendly race category,” Iya recalled. “I raced with my friend Hannah Olives, a newcomer, too. We both dreaded the swimming part.” She finished with a time of one hour, 47 minutes and 26 seconds.

Unilab Active Health and Bike King, presenters and organizers of the Tri United series, consider 2014 a milestone year for the series.

Never tire to try and tri.