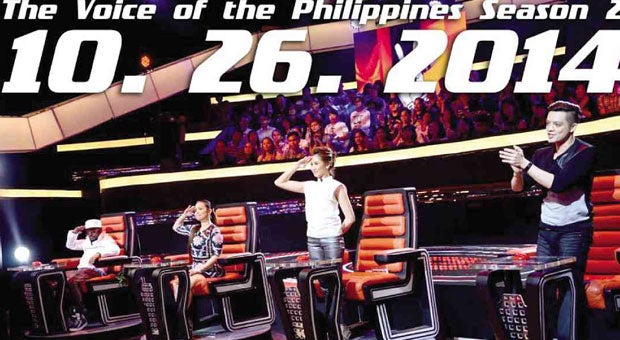 Now that the current edition of “The Voice of the Philippines” has gone from its “Blind” auditions to its “Battles” phase, the musical action on the singing tilt has become more eventful and exciting.

Compared to the previous edition of the show, the title now features younger and more personable finalists. That’s a decided improvement, because the reality in this country is that most of our singing stars not only sound good, but look great, as well.

Last season’s tilt did discover some outstanding singers, but none of them has become a big star yet—possibly because some or many of them, including the top winners, came up short in the looks and/or charisma department.

Looking at the generally younger and more personable singers featured in this year’s ongoing “Battles” phase, we feel secure in the belief that a few of them (not necessarily the ultimate top winners) could end up as popular and bankable stars.

Another strong suit of last weekend’s “Battles” round was the fact that many of the pairs of singers pitted against each other were so similar in quality of voice, performance style and even looks, compared to last season’s more “idiosyncratic” lot. Indeed, some vocal “duelists” sounded and looked so much like each other that they could have been twins!

This “preselected” synergy made it easier for viewers to go into greater detail in analyzing what made one bet even slightly better or more stellar than the other.

On the minus side, the fact that the musical rivals were so “copacetic” sometimes made them come off like they weren’t competitors, but singing harmoniously together, just for the fun of it!

Now, that sounds really nice and friendly, but singing tilts need a sharper competitive edge for the most superior talents to clearly make themselves felt—and heard! So, the tilt’s remaining finalists should stop being so lovey-dovey—and aggressively sing their lungs and hearts out!

A third general observation: Sometimes, it hasn’t been easy to more objectively determine the better singer in the Battles round, due to the choice of song that they are both assigned to perform.

Just last week, one particular song unintentionally favored a finalist with a higher vocal range, and unfairly limited the effectivity of a similarly good singer who couldn’t hit those high notes comfortably. In the future, songs should be chosen that both duelists can tackle with equal ease and competence.

All told, however, their season’s competition is more involving and exciting than the first time around, a sign that people involved in the tilt, on both sides of the camera, have benefited from lessons learned from their baptism of fire (and social media ire).

We hope that this includes less reliance on the “emotional blackmail” resulting from some hard-up contenders back and “sob” stories. Yes, singers are only too human, but after the sobs and pleas for emotional support and empathy, it’s talent that should and will out!