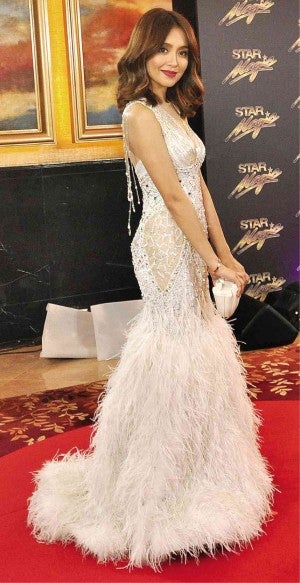 TEEN star wants to be ready when she holds a big concert. RICHARD REYES

“DJ is happy and excited,” she told reporters at the recent press launch of her debut record, “Kathryn,” under Star Music. “He’s also proud because he knows I did my best. I told him to buy many copies!”

Described by Kathryn as “sweet, young and happy,” the album contains three covers and five original tunes—one of which is the simple and catchy “Nasa Iyo Din Pala,” a response song to Daniel’s hit “Nasa Iyo na ang Lahat.” Both songs were composed by Jungee Marcelo.

“DJ found the song astig,” said the 18-year-old ABS-CBN talent, who will be top-billing, with Daniel, a remake of the 2000 drama series “Pangako sa ’Yo.”

The celeb, called “Teen Queen” by fans, said she and Daniel listen to Michael Bublé songs a lot. They also love Adam Sandler’s “Grow Old with You,” which Daniel recorded for his EP.

The inevitable follow-up question, of course, went: “Do you see yourself growing old with Daniel?” She replied, giggling, “You should ask him!”

Kathryn is well aware of her voice’s limitations. That’s why, she said, the team behind the album made sure to choose tunes that will suit her range. “I can’t belt or do fast songs. All the tracks in my album are songs everyone can sing along to,” she said.

Other songs in the eight-track album are “Crush ng Bayan,” “Love Has Come My Way,” “Ikaw na nga Yata,” “K Tnx Bye,” “Temporary Déjà Vu” and the carrier single, “You Don’t Know Me.” Kathryn also did a cover of the Sharon Cuneta classic “Mr. DJ.”

Has Sharon heard her version yet? “I don’t think so. But I hope she likes it. ‘Mr. DJ’ is one of her signature songs. We didn’t change the melody; we just used more instruments,” said Kathryn.

She had been taking voice lessons with Annie Quintos of The CompanY, even before she learned of Star Music’s plan to give her an album.

Acting will always be her comfort zone, she said, but she likes trying new things. “I had a great experience. It was my first time recording a song and shooting a music video.”

Surely, the bashers are ready to pounce. But Kathryn has learned to laugh off hurtful comments. “I used to get affected, but I’d like to think I’ve grown stronger,” she said.

Is a concert at the Big Dome likely? “Give me enough time to train,” she said. “When I’m ready, why not? I don’t want to do something that’s puwede na—I want to give a show worth watching.”

Pacquiao to fight McGregor ‘next year in Middle East’