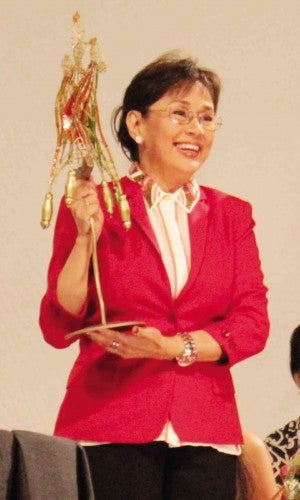 VILMA Santos won best actress at the Cinemalaya last year and in Dhaka fest this year.

For the fifth straight year, we are holding the Inquirer Indie Bravo!, a tribute to Filipino actors and filmmakers who brought home awards from various international film festivals in the past 12 months. This year’s celebration reflects significant movements in the ever-expanding indie community.

The tribute itself, set on Thursday, Dec. 11, now covers not only feature films but also shorts and documentaries. And, on top of the usual Manila-based festival films, we now have regional movies in the lineup.

This year, the Filipino filmmakers, who conquered festivals in places as familiar as San Francisco (United States) and as unexpected as Pyongyang (North Korea), similarly represent diverse fields and genres.

As one honoree, documentarian Adjani Arumpac, points out, the indie scene is no longer “metro- or genre-centric.” Arumpac is being cited for “War Is a Tender Thing,” the second part of a planned trilogy.

Another honoree, documentarian Baby Ruth Villarama, agrees, saying that the indie scene has grown so much, that docus are now shown alongside narrative features, not just in the usual venues like the Cultural Center of the Philippines and campus theaters, but also in mall cinemas. She is being cited for the docu “Jazz in Love.”

Another documentarian on the honor roll is Jewel Maranan, for “Tondo, Beloved: To What Are the Poor Born?”

Further underlining how diverse the local indie scene has become, TV documentarian Joseph Israel Laban is on the winners’ list for a narrative feature, “Nuwebe.” 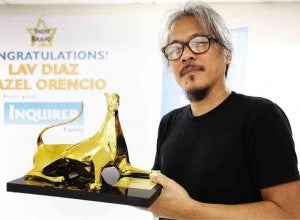 Interestingly, there is a sharp increase in the number of female Indie Bravo! honorees—from the usual one or two in previous years. Apart from Arumpac, Villarama and Maranan, other female filmmakers on Thursday’s list are Sigrid Andrea P. Bernardo (“Ang Huling Cha-Cha ni Anita”), Siege Ledesma (“Shift”), and Nerissa Picadizo (“Astray”).

As Picadizo and Ledesma point out, the indies have embraced concerns of the LGBT (lesbian, gay, bisexual, transgender) community—evident in the gender-sensitive films on the roster: “Shift,” “Cha-Cha,” “Astray” and Eduardo Roy Jr.’s “Quick Change,” which were acclaimed in pink festivals around the world.

Mendoza, who was awarded a Golden Cyclo for his body of work at the Vesoul fest, was proclaimed a Knight of the Order of Arts and Letters by the French government earlier this year.

Diaz was accorded the prestigious Prince Claus award by the Netherlands. Diaz is also the year’s biggest winner—not only in number of trophies but also in prestige. 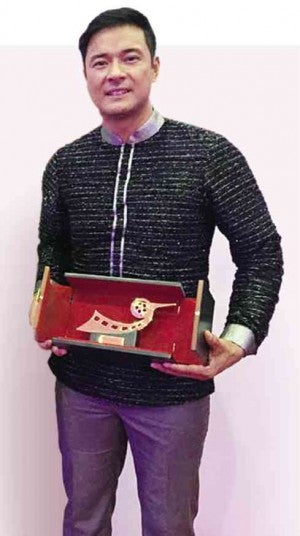 ALLEN Dizon won at the Hanoi fest for “Magkakabaung.” PHOTO FROM FACEBOOK OF DENNIS EVANGELISTA

Paul Soriano is being cited as director (“Thelma”) and producer (“Transit”). Indie Bravo! is likewise commending him for spearheading the student section of the Metro Manila Film Fest New Wave.

Consistent with these developments in the indie scene, seasoned filmmakers have also landed on the list, for winning in film festivals abroad: Joel Lamangan (“Kamkam”) and Maryo J. de los Reyes (“Bamboo Flowers”). The two veterans are pioneers in the international circuit—Lamangan won in Cairo for “The Flor Contemplacion Story” in 1995; De los Reyes, in Berlin for “Magnifico” in 2004.

Short films are represented by Picadizo’s “Astray” and the cast of Roberto Reyes Ang’s “TNT.”

For the past two years, actors have been included in the citations. In 2012, only actresses were honored; in the second year, winners from the 2013 awards season. Sid Lucero and Emilio Garcia, who tied for best actor at the Thessaloniki fest for “Selda” in 2008, finally get their much-deserved Guyitos this year.

After the cutoff for this edition of Indie Bravo! three more Filipinos won in international festivals. As 2014 draws to a close, we are reminded, happily, that it’s time to start drafting the lineup for 2015. 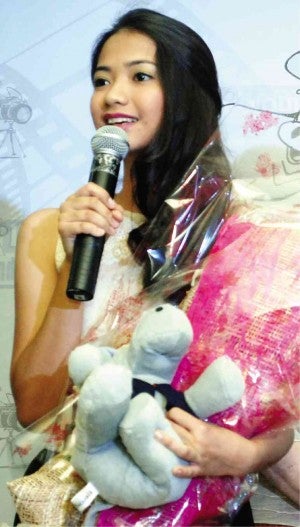 SANDY Talag is this year’s youngest honoree at 16. ARNOLD ALMACEN

The 5th Indie Bravo Awards! will be held at the Inquirer’s Makati offices, as part of the paper’s 29th anniversary celebration.