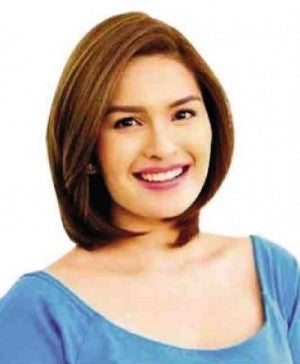 LUNA. Needs to win the battle of the bulge.

Jess Barrera, accountant: “I don’t like rock music or colored hair, so I usually switch channels when Yeng Constantino is performing. However, when I caught her interview with Boy Abunda on a late-night talk show, I found her an engaging interviewee. She spoke with sense and coherence. Lesson learned: Don’t judge a book by its cover!”

Jeanne Lorenzo, student: “Pauleen Luna should lose weight because, compared to Pia Guanio, her current lover’s ex (who is now married and has a child), she looks more matronly! On the other hand, Pia still looks like a single lady!”

Lita Rezada, housewife: “Why are Karen Davila and Ces Drilon fond of wearing sleeveless outfits on a news telecast? Those armpits are distracting, especially Ces’ hefty upper arms. I’m not a fan of Korina Sanchez—but, at least, she deserves an enthusiastic thumbs-up for the way she dresses.”

Yollie Dizon, businesswoman: “After ‘The Legal Wife’ comes ‘Two Wives,’ which has a familiar plot, albeit with an irritating set of actors. The feisty Kaye Abad lends credence to the thin script. But, did she take a very physical type of acting lessons? Is it fair to call her style ‘scandalous acting’? As Victor, Jason Abalos should internalize more to be convincing in his role.

“But, it’s the mistress who will make you want to turn off your TV set. Interest turns to irritation when Erich Gonzales enters the scene—she looks like she’s just reading the script—and she’s more conscious about the way she looks.”

Chona Sienes, housewife: “I like watching the newscasts of GMA 7, particularly Jessica Soho’s ‘State of the Nation,’ because the network’s reporting is objective and often has more depth!”