Christmas is a warm, frisky puppy 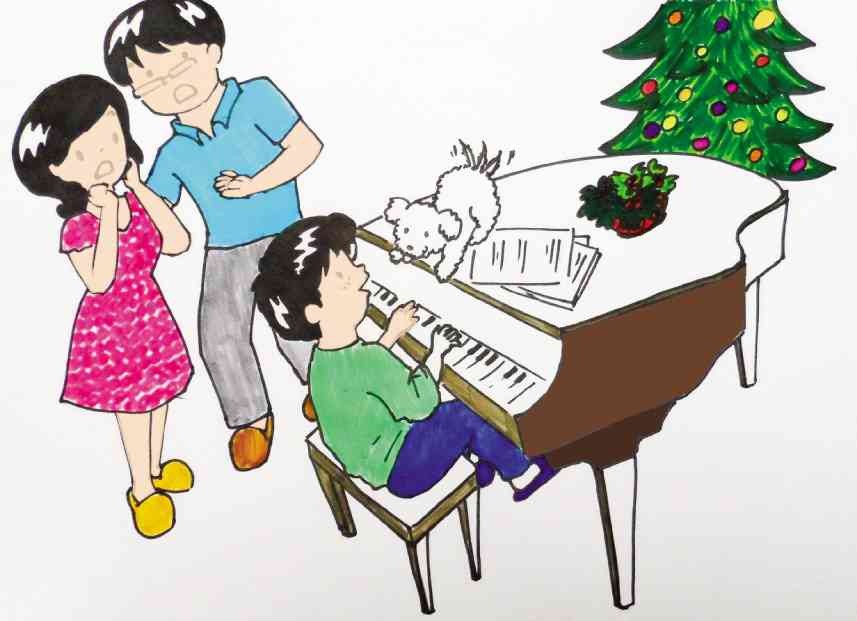 Many children think that happiness is a warm, frisky, bright-eyed and bushy-tailed puppy—but Van Cliburn Carlo Urbina couldn’t have disagreed with them more. Well, maybe it wasn’t all his fault. He was a sickly child with a lot of allergies, and his parents made sure that their home was absolutely free of any possible pollutants and allergens—and, of course, that included all those messy and furry and itchy and scratchy dogs!

On top of Van’s parents’ neurotic fears, he was a famous child prodigy, a brilliant pianist who was so gifted that, at only 5 years old, he had already made his solo debut at the Cultural Center of the Philippines!

Young Van was such a precociously gifted pianist that his parents did everything to develop his potential, hiring the best mentors to rehearse him for six hours each day.

His complete dedication to his piano lessons would have made his namesake, the great American pianist, Van Cliburn, very happy, indeed!

In all of this success and acclaim, however, nobody bothered to ask young Van what he thought of the whole arrangement.

Once in a rare while, however, his being just a boy managed to disturb his well-ordered world of complete discipline and focus. Most recently, the car taking him to a concert passed by a park, and Van found himself envying a little boy who was playing with his dog, which was wagging its tail so happily that it looked like he was about to levitate!

For a split second, Van envied the little boy and his pet for obviously having the time of their lives. But, he quickly stopped and told himself that, if he had been that little boy, he would immediately have gotten an allergic reaction from all those germs that were being exchanged during the highly unhealthy slurp session! So, Van slowly slid back into the safe cocoon of the car as it drove on to the CCP—where he gave the best performance of his career!

Then, on the week before Christmas, Van’s perfect world of discipline, obedience and logic experienced its biggest threat: Early one morning, as he was practicing at his piano, he heard soft scratching and whimpering sounds coming from the gate. Van put on his gloves, gauze mask and plastic slipper covers to investigate.

When he opened the gate, he was shocked to see that the pathetic cries for help were being made by what looked like a very tiny puppy, which was obviously in need of immediate help!

As he reached out for the trembling pup, Van remembered all of his parents and doctors’ warnings—“Don’t touch!—germs!—allergy!—infection!—disease!—death—!”

But, the puppy looked so pitiful that Van held it anyway, and took it to his room, where he did his best to give it water, milk, warmth—whatever it was that it needed.

Van knew only too well that he couldn’t keep his little secret to himself for long. Even now, as the puppy started to feel warmer and better, its tiny whimpers were gaining in volume and frequency, until they seemed to fill his whole room. It would be only a matter of time before his parents would agitatedly come rushing into his room to keep the intruding puppy and its millions of germs from polluting his perfect, little cocoon!

Still, he nourished and kept the puppy warm, keeping it in a trunk when his parents were in the house, and taking it out for feeding and airing only after they stepped out. Nobody discovered his whimpering, scratching, and soon burping, barking and happily wagging secret!

One week later, it was Christmas Eve, and Van and his parents woke up at midnight to open their presents. Van got especially generous gifts—like a tiny car with a working engine that he could ride around the house!

Even as he appreciated what his parents had lovingly given him, Van worried about his little puppy, and pretended to feel sleepy way before he used to.

This surprised his parents, and they were about to kiss him goodnight when—what should unsteadily walk into their living room but Van’s little “secret,” whom he hadn’t even had the time to give a name to—!

The little puppy, its eyes now bright with good health and happiness, wagged its tiny tail slowly, walked up to the Christmas tree—and peed on its base to proudly claim “ownership” of it!

Well, you can imagine how loudly Van’s parents screamed when they saw the tiny pup! It was like their home had been invaded by a huge, terrible and fatal pestilence! They were about to hurl the offending puppy out of the window when Van suddenly shouted, in a voice so unusually strong and loud that it surprised even hismelf—“No, stop! Please, he’s mine!”

Slowly, dazedly, his parents looked at him, as Van protectively pulled his puppy out of their grasp, and nuzzled it to reassure it. The pup wagged its little tail even more enthusiastically, and Van took a deep breath and finally told his parents everything!

They looked at him, stunned, and didn’t know what to do—until he pointed out that it had been days since he’s found the puppy, but he was healthy and happy—no allergic reaction at all! So, could he keep the puppy, please?

“But,” his father pointed out after he found his voice again, “it doesn’t even have a name!”

And so, after his parents had grudgingly agreed, Christmas became a loving and beloved part of the Urbina family, which had once been so dry and lacking in barking and wagging fun!

And it made the Yuletide season truly special for its now smiling and laughing masters, for many more years to come! Happiness is truly a warm, waggy and wiggly puppy—named Christmas!