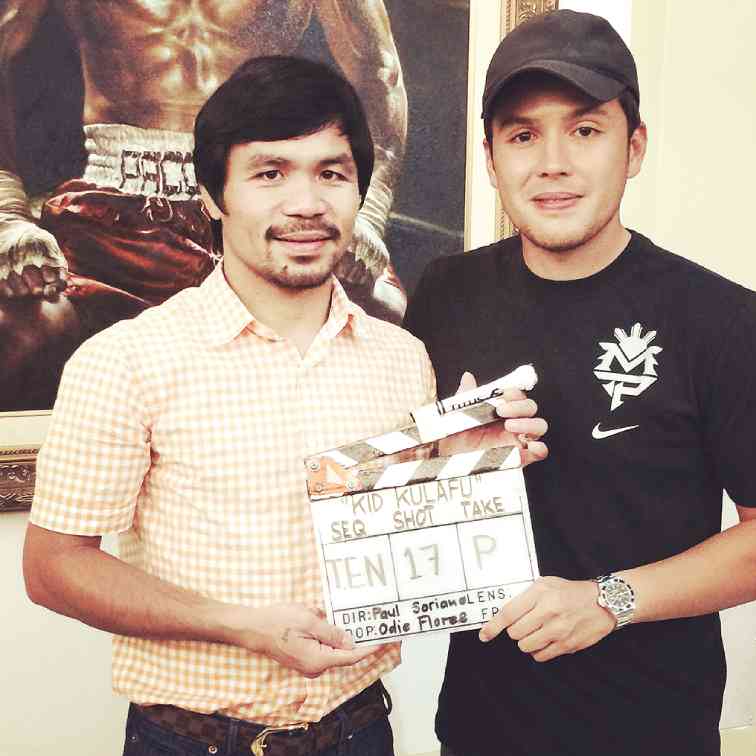 Director Paul Soriano (right) reports that he got full cooperation from his famous subject Manny Pacquiao for the biopic, “Kid Kulafu.”

LOS ANGELES – What were Manny Pacquiao’s childhood and teenage years like? How did the tough challenges he endured in Mindanao help make him the world boxing sensation that he is today? Director Paul Soriano promises to tell untold stories of Pacquiao’s struggles as a youth in his movie, “Kid Kulafu.”

The title is from Pacquiao’s name as a young amateur boxer. The film’s story begins with Pacquiao’s birth in the mountains of Bukidnon and climaxes with his first world championship, which he won via knockout, at age 19, in Bangkok, Thailand.

Made with the full cooperation of one of the world’s greatest boxers, “Kid Kulafu” features two actors whom Paul carefully picked to play Pacquiao at various ages–Robert “Buboy” Villar (14 to 17) and Bon Andrew Lentejas (5 to 7).

Rounding out the cast are Jake Macapagal (as Dizon Cordero, Manny’s first boxing trainer) and Jomari

Angeles (as Abner Cordero, Manny’s good friend in General Santos City who went with Manny and Eugene to Manila to become boxers).

Paul hopes to premiere “Kid Kulafu” in an international film festival early next year before its theatrical release.

We spoke to Paul while he was in LA to do postproduction work on “Kid Kulafu.” He wore his ubiquitous cap everywhere we went, from a restaurant in Beverly Hills to the 20th Century Fox studio lot.

As a producer, Paul’s five credits include director Hannah Espia’s “Transit,” an acclaimed film about Filipino workers in Israel. It was the Philippines’ entry in the last Oscars’ best foreign film race.

“Kid” is Paul’s third feature as a director, following “A Journey Home” and “Thelma.” Born in LA but moved to the Philippines when he was 8, Paul comes from a show biz family–his dad is TV commercial director Jeric Soriano, and the late actor Nestor de Villa was his grandfather.

Paul went back to the United States to study at De Anza College and Santa Clara University in the Bay Area. Upon returning to Manila, he became an in-demand director of TV commercials like his father.

Casting the actors who play Manny is crucial. What decided it for Robert Villar and Bon Andrew Lentejas?

We had several auditions in Metro Manila and General Santos City. We auditioned hundreds, but Robert stood out. I had my eye on him since I first met him but I had to make sure he was the one. I put him through several acting workshops, a boxing clinic and an actual script reading. He passed them all. I feel he was born to play this role.

Bon Andrew Lentejas was a last-minute discovery. We had a lot of trouble casting the younger Pacquiao. Bon fit the role perfectly after several acting workshops. He has a bright future as an actor.

What inspired you to make “Kid Kulafu”? Why did you concentrate on Pacquiao’s childhood and teen years?

The idea came to me almost three years ago. I developed a close relationship with Pacquiao through several TV commercials I directed him in. In one of those shoots, I pitched to him the idea of a movie about his life. He said that it had been done before; I said my angle was his childhood–before he became a world champion.

I wanted to show people that, though you are born with nothing, you can become the best in the world through your passion, attitude and determination. He got so excited that he stood up and started pacing. He invited me to his home, where we talked until 4 a.m. about his early years, how he grew up. Then the two-year research period began. I was in General Santos City almost every month, interviewing his family and close friends.

What makes it special is that Manny officially signed a contract with my film production company, TEN17P, giving us the official rights to his life story, making it an authorized and official biopic.

I wanted to focus on Manny as a person and to go in-depth, into his character and persona. The idea is to show what people donít know about Manny.

Why did Pacquiao pick Kid Kulafu as his boxing name?

That was given to him by his uncle, Sardo. As a kid, Manny used to sell empty Kulafu bottles that he collected from Sardoís shop. Kulafu is a popular alcoholic beverage in Mindanao, often called the gin of the region.

The reason I chose it as the film’s title is that only a few know this [bit of trivia].

Did you and screenwriter Froilan Medina interview Pacquiao before the script was written?

Yes, we interviewed Manny numerous times throughout the research stage. I was surprised that he remembered so much about his early life, and was very candid and detailed. We had a lot of material to work with. The challenge was what to put in the film.

Also key was interviewing his mother. We spoke to her numerous times as well. The film also focuses on their close relationship. She was very supportive of this project.

We also spoke to a lot of people from his hometown. We went to his elementary school and the houses that he lived in. We immersed ourselves as much as we could so that we could do justice to the story. This was a two-year process.

How significant were these childhood and teen years that you cover in the film in shaping the man we know today?

What you see in this film is the foundation of a champion.

Manny had everything going against him–poverty, hunger, a broken home, even being homeless. But he didn’t let that stop him.

What interesting insights did you get about who Manny was just before his rise to boxing glory?

He just never gave up… he made his dreams come true. It’s easy for anyone to say that but he actually lived it. That has been the biggest inspiration for me in making this film. There were so many challenges but I looked at Manny’s life and how he used those challenges to fuel his passion to make it happen. I did the same; I never gave up. And Iím happy to say we finished the film.

Did Manny give any tips to the two actors who play him?

He personally told them his story. It was important for the actors to meet him in person and to hear it from him–how tough his life was and how he overcame all obstacles to become a world champion. He also taught them some boxing techniques… those moments spent with him inspired them to work hard and believe in themselves.

Did Manny visit the set?

He did more than that. He put us in contact with his family, parents and siblings who opened up their hearts to us. He connected us with the right people to interview so we could be as accurate as possible.

When we were in General Santos City, Manny helped secure locations and even sent security guards to make sure that my actors and staff were safe. He hosted a dinner at his home for my whole production team.

Has he seen some footage of the film?

I’ve shared with him some of the rushes. He canít wait to see the film on the big screen.

Why did you pick Alessandra De Rossi to play Dionisia?

Alessandra was my first and only choice. She’s a great actress. I knew this was a character she could easily portray. Alessandra was so natural and took direction very well. She gave me everything I wanted and more.

Did Dionisia visit the set and watch Alessandra portray her?

Dionisia wasn’t able to visit the set but she got to speak with Alessandra. I’m not sure what they talked about but I know Dionisia was very happy to hear Alessandra was playing the role. We videotaped all our interviews with Dionisia; Alessandra watched those and picked up Dionisia’s mannerisms.

Did you use some actual locations that figured in Pacquiao’s young life?

Yes, we filmed a lot in General Santos City. We shot in his elementary school. We also shot in the house owned by Dizon Cordero where Manny lived during his training with Dizon. We shot some boxing scenes in the plaza where Manny fought.

Does the film show some ugly or painful truths in Pacquiao’s young life?

It’s as accurate as possible. We did explore the mistakes that the young Manny made.

Pacquiao is a national icon. What are your hopes in bringing his early years to the screen?

My hope is that this film will inspire people to believe that with faith, determination and unrelenting passion, one can accomplish almost anything. There are no excuses.