On the verge of insecurity | Inquirer Entertainment
Close
menu
search

On the verge of insecurity 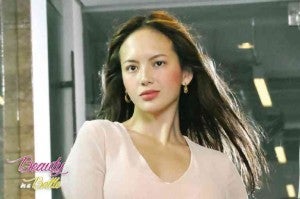 The comedy film “Beauty in a Bottle,” written and directed by Antoinette Jadaone, is a satirical take on society’s obsession with beauty, through the lives of three women grappling with insecurities. Assunta de Rossi plays an advertising executive threatened by an upstart (Ellen Adarna); Angelica Panganiban, a product model struggling with her weight, and Angeline Quinto, an end user who never thinks she’s pretty enough.

Jadaone, at a press conference, said conceptualizing the film was easy for her because the issue tackled is prevalent among women. “A lot of us, at some point in our lives, have been unhappy with the way we look,” she said. “This really happens, and many women will relate to it.”

Assunta pointed out that the pressure to look good is even more overwhelming in show biz, where the beautiful are a dime a dozen and where expectations are high, unrealistic even, at times.

“It’s especially hard now because of social media. Anyone can take photos of you and post them online. And if you don’t look your best, some would bash you for it,” she told the Inquirer. 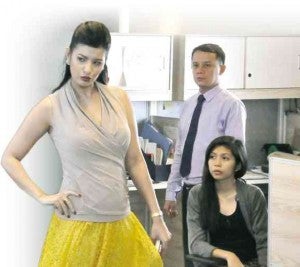 ASSUNTA de Rossi is insecure about her oily skin

As such, while Assunta, Angelica and Angeline are all beautiful in different ways, they admitted living with niggling insecurities still, like other women. They shared some of these in the media event for the movie, which opens in cinemas on Oct. 29.

Assunta said she’s always been conscious of her oily and “imperfect” complexion. “It’s my lifelong insecurity. I envy girls who need to only wash their faces to look good. And since cameras now are usually high-definition, I get to see all my blemishes!” said Assunta, who plays Vilma.

She admitted to giving in to the onslaught of beauty product advertisements, but drew the line on cosmetic procedures. “I like creams and such, but I’m scared of surgery. I am afraid of messing up my face,” she said.

Angelica, like her character Estelle, has had to deal with weight fluctuations. “There are times when I don’t like how my body looks…I also get hurt [by comments]—’di naman ako bato,” the actress said, adding that she has learned to take such negative notices in stride.

“People readily judge you harshly, without knowing what you’re going through,” she said. “But it’s my body. If I want to eat and enjoy, it’s my choice. If people don’t like that, so be it.”

Unlike Assunta, singer-turned actress Angeline, who plays Judith, is open to plastic surgery and has, in fact, undergone liposuction and had her eyes enhanced. She said one of the times she felt that she wasn’t beautiful enough was during her stint on the talent search “Star Power,” which she won. 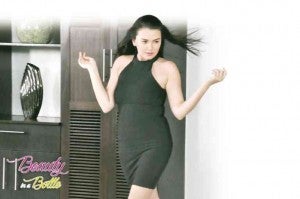 “When my fellow contestants and I go on mall shows and tours, few people approach me for photo-ops. A fan even handed me her camera, and asked me to take a picture of her with the other contestants. She didn’t think I was part of the show!” she related, laughing.

At the end of the day, Assunta said, it’s all about accepting your imperfections and focusing on your positive features and qualities. “It also helps to have family and friends who tell you that you’re beautiful,” she said.

Angeline said she’s more confident now (well, she has heartthrob Tom Rodriguez as her partner in this film). She said she’s thrilled about having her very first billboard on Edsa. “I always take Edsa even if it’s out of the way,” she said, drawing laughs. “We’re going to Lawton? Edsa tayo!”

And, as cliché as it may sound, being in love does make a woman feel beautiful, according to Angelica, who’s in a relationship with John Lloyd Cruz. “When I got to know him better, feeling ko ang lago ng buhok ko, ang ganda ko, ang bango ko, ang puti ng ngipin ko,” she said. “It’s a blessing.”

Read Next
Gayes vs Pharrell, Thicke
EDITORS' PICK
New Year, New Rediscoveries
WHO says fabric facemasks still work against virus variants
1,797 more Covid-19 infections raise PH active cases to 33,603
UP president challenges AFP claim on Reds’ campus infiltration
Is your company a growth champion? Stand up and be recognized!
Acer Philippines welcomes you to its first flagship store
MOST READ
Wife stabs husband after seeing her younger self in old photos, thought he was cheating
NBI files raps vs top execs of 2 tech firms
Ate Vi’s message to those against ABS-CBN’s franchise renewal
UK Covid-19 variant already detected in PH as early as Dec. 10, says expert
Don't miss out on the latest news and information.