entertainment /
DID YOU KNOW

LOS ANGELES—The family of Marvin Gaye has won a round in a court battle over allegations that last year’s blockbuster hit song “Blurred Lines” ripped off the late Motown legend’s work.

A US federal judge on Thursday denied a motion by singer Robin Thicke and songwriter Pharrell Williams, who wanted a court to reject the plagiarism accusations made by Gaye’s children.

The ruling clears the way for the dispute to head to a celebrity trial set to open in LA in February.

The Gaye estate says “Blurred Lines” copied elements of the singer’s 1976 track, “Got to Give It Up.” 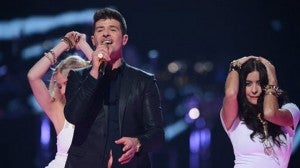 The two sides brought in music experts who dissected the songs’ structures to debate the merits of the claim.

“Defendants have made a sufficient showing that elements of ‘Blurred Lines’ may be substantially similar to protected, original elements of ‘Got to Give It Up,’” ruled Judge John Kronstadt of the US District Court for Central California.

The song contains the refrain “I hate these blurred lines/I know you want it” and has been condemned by critics who say the lyrics refer to the issue of sexual consent.

The R&B singer has said that he was fond of “Got to Give It Up” when he went out to record “Blurred Lines.”

But in court, Thicke insisted that he had embellished the connection as he liked being called the “white Marvin Gaye” and contended that Williams—who later recorded the smash hit “Happy”—did all the writing on “Blurred Lines.”

The judge said: “Thicke’s inconsistent statements do not constitute direct evidence of copying.”

Thicke and Williams brought to court a musicologist, Sandy Wilbur, who testified that the melody, harmony and rhythm of the songs were different. She said that only one note in the songs’ key phrases had the same pitch and placement, but did not last the same duration.

But an expert for Gaye’s family, Judith Finell, pointed to eight similarities and said that Wilbur erred in “microscopically analyzing” each musical element in isolation. AFP