LOS ANGELES – He sang a line from a Barry Manilow song and made irreverent quips. Alejandro G. Iñarritu was introduced as “el Mexicano loco” (Michael Keaton, star of his acclaimed film, “Birdman,” calls him that) so I introduced myself as “el Filipino loco.” Thus began my recent funny chat with the first Mexican to earn an Oscar Best Director nod (for “Babel”), at the New York Palace Hotel.

The reviews for “Birdman” are mostly raves. When asked if he reads reviews, the filmmaker, whose other credits include such gems as “21 Grams,” “Amores Perros” and “Biutiful,” answered in his big voice, “I try not to.”

Alejandro, bearded and dressed in black, his hair a wild mass of curls, volunteered, “The only director in the world who shot a critic was a Mexican.” 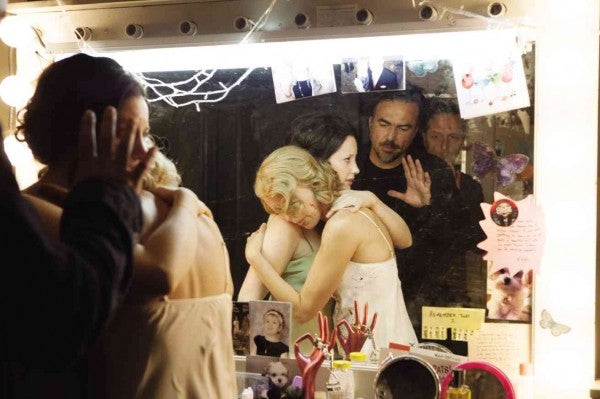 Breaking into a chuckle, which he did often this morning, Alejandro continued, “Be careful when you write a review. Emilio ‘El Indio’ Fernandez read one and didn’t like it. He rang the door of the critic, also Mexican, and shot him in the stomach (in the testicles, according to IMDb). [Ingmar] Bergman said that [Emilio] was his idol. He said that Emilio was the only guy who did it. It had to be a f—ing Mexican. With a gun.”

The Mexico City native stressed, “Honestly, I really try not to [read reviews]. My father told me something that is true—watch it with success. He said, ‘Taste [success] and then spit it out.’ Because it’s dangerous.”

Laughing again, he remarked, “Obviously, the girls from Fox (Searchlight Pictures) send me the good ones. So sometimes I say, ‘Ha!’ But then I remember my father: ‘Spit it out! Spit it out!’”

The first Mexican-born filmmaker to win the Cannes Best Director award (2006) admitted, “I feel very satisfied and rewarded that this tiny experiment (‘Birdman’) was welcomed in such a way that people feel a certain happiness that the film exists.”

He recounted a different reaction to “21 Grams”: “I remember when I came here to the party for ‘21 Grams’…my God, it was like a funeral. Everybody was crying. Everybody was like, ‘F–k you…it was so painful.’

“The other day, in the [NYFF] party for this film, I saw people laughing. I said, ‘Wow, this is so different.’ Because all my films have been different. So, just the vibe that I received after the screening made me happy. I’m a happier person.” Chuckling, he quipped, “That’s the best review for me.”

Shooting “Birdman” in long takes, a first for him, invigorated Alejandro. “It taught me to be less lazy,” he declared. “I was getting a little depressed.”

“When I did ‘Biutiful,’ I was really depressed,” he laughed as if to underscore the irony in his statement. “Nothing really excited me. I saw the world as very dark. Even filmmaking has become a [comfort] zone where I thought I was doing exactly the same thing with the same approach. When you think that you can do things the same way, then the fear disappears and it’s just something that is empty, in a way.

“It was very interesting, not only thematically, to make this film. It was a kind of therapy in a funny way with all these guys.”

He cited the challenges of unbroken tracking shots (by DP Emmanuel Lubezki), some of which last as long as 10 minutes: “I will never be able to hide my s–t. If one scene is bad, it will be bad because I cannot strip. This is like an endless spaghetti that I cannot cut. I cannot serve the spaghetti cut. So it has to be long. It was terrifying. It obligated you and the actors to be much more honest and not to be relying on, ‘OK. Let’s do the master (shot), then let’s do the two-shot, the over-the-shoulder and then the closeups.’

“You know that, in all that fragmentation, you will get away and you can hide a bad performance. You get a little lazy. You fix everything in the editing room.”

He said what may become one of his classic quotes: “With this film, it’s like making love without a condom. It’s real. It’s amazing. It’s the real thing. That’s how it feels.”

He dished, “Every financier said we should not shoot here (in New York) because of the union cost and all that. “All of us fought to make it here because I knew that without the texture, smell, people and accent of the New Yorkers, it will be absolutely stupid. To let Toronto pretend to be New York, as many films do now, it’s just horrible. 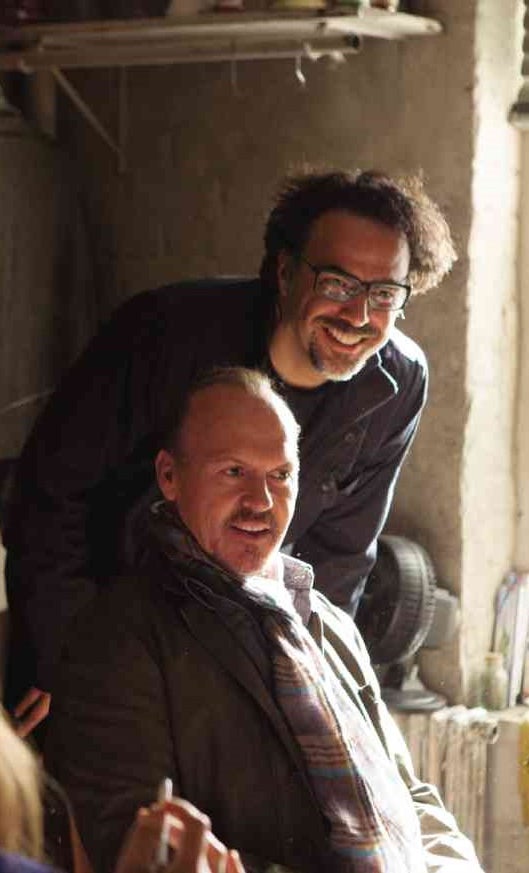 ON THE SET with his “Birdman” star Michael Keaton

He was lucky to shoot in the venerable St. James Theatre, where the story unfolds—the characters are rehearsing a stage adaptation of Raymond Carver’s short story, “What We Talk About When We Talk About Love.” “Broadway theaters are booked for years. We were lucky that the theater was open for two weeks between Barry Manilow shows and I don’t remember what. When I went to the first rehearsal [for the film], I saw Barry Manilow’s dressing room, still with his shoes. Seventeen shows. It was amazing.”

Suddenly, Alejandro broke into a Manilow hit, “Looks like we made it!”

“It was tough to convince those (St. James Theatre) guys but they loved the idea,” he said. “We just went in for two weeks. Not one day more. That was one terrifying thing. There’s a lot of jealousy between the theaters. When we were shooting the scenes of Emma and Edward on the rooftop of the St. James Theatre, the other theater in front was more visible. They were trying to charge us money for that. It was kind of dirty New York s–t.”

But, he declared, more difficult than anything was the Times Square scene. Michael’s Riggan Thomson actor character, locked out of St. James, had to walk, in his briefs, to the front of the theater, right in crowded Times Square.

“That was one of the toughest [challenges], logistically, because we didn’t have money to hire extras,” Alejandro pointed out. “We didn’t have the money to close the area as ‘Vanilla Sky’ did. ‘Spider-Man’ was being shot that moment with Emma. They built a Times Square set. I asked them, ‘Please, can you lend us the set? They said no.”

Asked how he convinced Michael to streak, Alejandro quipped again, with a smile, “I do what all directors do, which is lie and manipulate. And seduce. As moms, the church and politicians do.”

But he was all-praise for his lead actor in his approach to playing a Hollywood has-been haunted by his super ego and previous role, Birdman, an omnipresent voice who taunts him. “Michael is very self-assured. I had never seen that in an actor [before] There’s a lot of camera tests, makeup and s–t…tons of people touching his hair. Michael never complained about that. He was never like, ‘How do I look?’ He’s never insecure. He didn’t give a f–cking damn about how he looked.

“I had never seen somebody so secure, physically and emotionally. He was very brave to go out there, knowing that there might be guys who would videotape him for YouTube. To be seen in your underpants at that age. I was [shocked] at how brave he was.”

Told that, in separate interviews, his actors quipped that self-absorbed, know-it-all character Riggan smacks of Alejandro, the filmmaker laughed and replied, “It’s funny that Michael and Edward have been teasing me about that. All of us are reflected in what the films talks about.”

However, Alejandro conceded, “I personally recognized myself in Riggan Thomson because my creative process has always been torturous for me. I’m a perfectionist. When you demand perfection from yourself, it’s a very difficult role to follow. The cost is high. That voice inside me is always telling me, how bad, how stupid and how mediocre I am. Or how I could be doing better. There’s always that voice that tortures you.”

He recounted how hard it was to get “Birdman” off the ground: “It was absolutely difficult to get money for this film. It took me one year. Nobody believed it. Why would they give money to a Mexican guy who only makes people cry and shows people suffering? Why would he be doing a [black] comedy?

“And then Michael Keaton’s name did not raise money. You know how it feels like hedge funds [in financing films] now? Like, if you have this actor, they say, OK, let’s see the value. Is it like Apple or Exxon?”

As for the big presence of Mexican filmmakers in Hollywood today, led by himself, Alfonso Cuaron and Guillermo del Toro, he jested, “The cartel is taking over.” With a guffaw now, he added, “We are coming! We are buying many film festivals, Hollywood.” 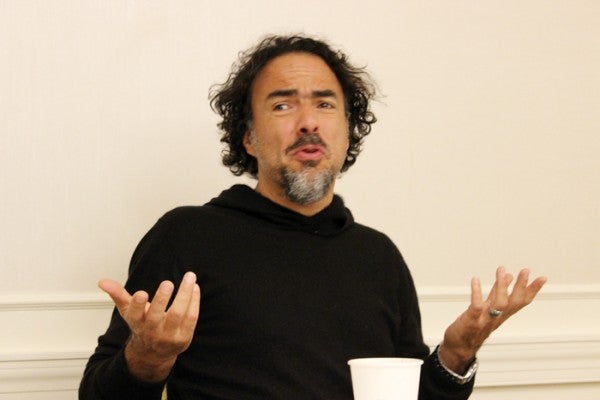 “I will say it’s a beautiful coincidence,” he opined. “There is always like this movement that they want to label. We are just friends who happen to be of similar ages.”

Laughing again, he teased, “Alfonso Cuaron is the grandpa. He’s older.” Alejandro is 51; Alfonso is 52, Guillermo, 50.

“But we’ve known each other for a long time,” he emphasized. “It just happened—like maybe how it happened with the Italian or French directors who were friends…it’s just a coincidence.”

He proudly cited, “There are other great Mexican filmmakers, like Carlos Reygadas, Fernando Eimbcke, (Gerardo) Naranjo, Amat Escalante…They are doing amazing things. It’s a good moment for Mexican cinema. And there are young guys who are better than us, I think. They will come—the second cartel is just around.”

Alejandro, who lives in LA with his wife Maria and their two teen kids, said that a poem was included because of its striking relevance.

“I put that Raymond Carver poem (‘Late Fragment’) in the beginning. He wrote that poem when he was 50 years old. He was dying and he knew it was his last poem.”

He paraphrased the poem but here are Carver’s exact words: “And did you get what you wanted from this life, even so? I did. And what did you want? To call myself beloved, to feel myself beloved on the earth.”

Alejandro asked aloud, “What you want from life is to feel beloved, right? That’s what life’s really about and what this character (Riggan) has been looking for, in the film. All his life. I hope that the film connects not only with actors and artists but with everybody who’s in this selfish era of social media where everybody is a celebrity. We all keep looking for validation.”