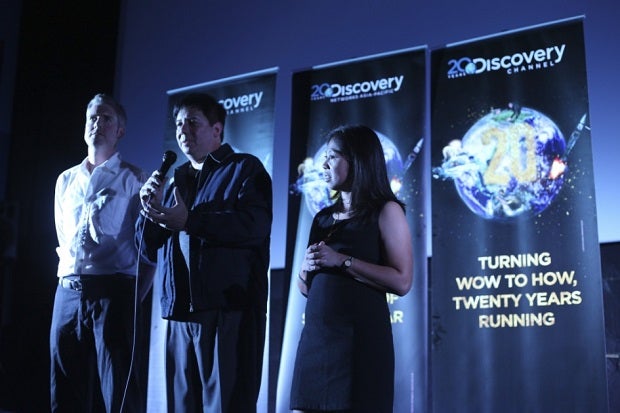 MANILA, Philippines – On Nov. 8, 2013, the most powerful storm to hit land that year ravaged the Eastern Visayas, destroying lives and property.

A year after, Discovery Channel revisits one of the hardest hit areas, Tacloban in Leyte province, to find out how much it has recovered from Supertyphoon “Yolanda” (Haiyan).

Haiyan: After the megastorm is a 60-minute documentary that pays tribute to the people and organizations that rallied to rebuild the storm-ravaged city and the surrounding islands, and to honor those who lost their lives in the disaster.

Hosted by Filipino-British television presenter and actor Trey Farley, Haiyan: After the megastorm will premiere here and across Southeast Asia on Saturday, 8 November at 8:00 p.m.

Before this, a screening of the special was held at the Robinsons Movie World and was graced by Tacloban City Mayor Alfred S. Romualdez, various government officials, city stakeholders, industry partners and other VIPs.

“This documentary makes us remember the sorrow of losing many of our loved ones and the vast devastation that typhoon Haiyan brought to our shores. But it also shows the heroism in our people’s hearts, the hard guts it took to help us to get back on our feet again with the help of the rest of the Philippines and the international community. Haiyan spotlights the need for cities like Tacloban to be more prepared for the new normal, as the strength of each city comes from the mindsets of its people, and that education and building social capital is absolutely crucial in order to incorporate resilience into all aspects of life,” said Mayor Romualdez.

“Around this time last year, Haiyan and the aftermath of the storm captured the attention of the world. Discovery Channel wants to share the inspiring story of how the city and its people rose above the ruins and destruction to rebuild their lives. Haiyan: After The Megastorm is a tribute to the tenacity and optimism of the Filipino people, and it is our honor and privilege to bring this to our viewers,” said Theresa Ong, Senior Vice President – General Manager, Southeast Asia, Discovery Networks Asia-Pacific.

The documentary was produced by Discovery Networks Asia-Pacific, in partnership with the City Government of Tacloban and Caelestis Productions.

“The people of Tacloban City and I thank Discovery Channel for sharing our story of resilience, hope and triumph against all odds with the world,” Mayor Romualdez added.

Glimpses of devastation a day after ‘Yolanda’

Yolanda is ‘most powerful typhoon for 2013’—weather experts