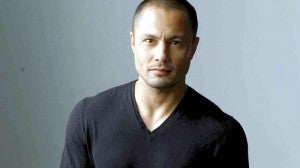 MANILA, Philippines—The estranged wife of actor and TV host Derek Ramsay revealed in a reply-affidavit submitted to the Makati Prosecutor’s Office on Thursday that she was beaten and made a sex slave by her husband when they were still living together in an apartment in the city in 2002.

Mary Christine Jolly Ramsay submitted a 21-page affidavit detailing her reply to the counter-affidavit submitted by Derek in relation to the criminal complaint she earlier filed in violation of Republic Act No. 9262 or the Anti Violence Against Women and their Children Act.

“Derek’s counter-affidavit is a lie to cover his lies,” Mary told the media in a press conference a few hours before filing her affidavit to the prosecutor’s officer.

She claimed that there was no truth to the actor’s statement that she was “an alcohol-wasted woman lying on a Makati sidewalk” who pursued and pressured him to marriage. Mary said she met Derek in a bar after he won the MTV VJ Hunt and that they were introduced by a common friend.

“He invited me out and we rode in his car. That was how we met. He did not pick me up from some sidewalk. Excuse me,” Mary explained in her affidavit noting that she was currently studying in the country that time.

In her recent affidavit, Mary also accused her husband of physically and verbally abusing her and not the other way around. In his counter-affidavit, Derek claimed that Mary had “violent tendencies” especially when they quarreled. The actor also said that he was the “silent victim” of Mary’s alleged “outbursts, paranoia and insecurity.”

“I am very angry. For him to stoop to that level makes me feel ashamed to have him as a father of my son,” she added

To her defense, Mary claimed that the actor would usually demean her character.

“He would call me a ‘slut,’ ‘bitch,’ and ‘flirt.’ He would at times demand that we make love just to make me feel low and unworthy,” she said.

Mary even noted that she felt like she was a sex slave whom Derek would go home to if he did not find anyone he could make love with.

“On one occasion, he repeatedly punched me and bloodied my nose. He also committed spousal rape while I was sick in bed,” she added.

But Ramsay reiterated that the legal battle has been for their 11-year-old son whom she claimed Derek has refused to recognize as his own. She earlier told the media that she filed the complaint to pressure the actor to fulfill his obligations and support his son.

“This fight is not about me. It is about my child abandoned by a negligent father for so many years,” she said, adding that Ramsay had seen their son only “four times” and that he did so “because I threatened to sue him.”

She also detailed that during those meetings the actor would only proudly display his six-pack abs and boast owning expensive cars.

“I will not stop fighting until the end because he is not only hurting me with these accusations, he is also hurting our son,” Mary added.

During the filing of the affidavit on Thursday afternoon, Mary and Derek faced off inside the City Prosecutor’s Office together with their son.

The couple’s kid also submitted a two-page handwritten letter to the prosecutor stating how he felt about his dad. “He always talks about his cars and he never asks about me,” the letter read.

He also said that her mom made a mistake in marrying “such an evil person.”

“I wish he would go to jail so he would finally know what it feels like to be treated with no respect. The truth will prevail, not his lies,” he added.