CNBLUE is back in Manila, wants to try Jollibee 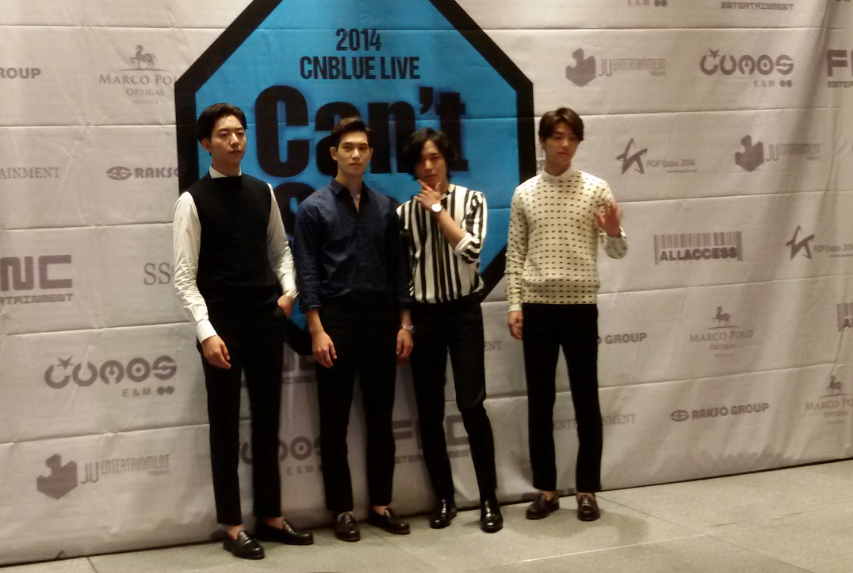 MANILA, Philippines—CNBLUE is not one to make fans wait for long. Just a year after its first show in Manila, the group is now back in the country for another full-blown concert that will make both their Filipino and foreign fans swoon in excitement.

In the afternoon of September 18, 2014, members of the group: Jung Yonghwa (vocalist and guitarist), Lee Jonghyun (lead guitarist), Lee Jungshin (bassist), and Kang Minhyuk (drummer) dropped by a hotel in Pasig to meet with the Philippine press and a few lucky fans who won passes through a promo conducted by the show’s organizer.

When the boys finally came out on stage, one member kept on saying “Salamat, salamat.”

Asked what separates their “Can’t Stop” tour from their previous concert, which they also brought to the Philippine shores, the boys of CNBLUE answered that they are now offering a more diverse music.

And like their fans, each member of CNBLUE also has an artist they look up to. When asked to name a musician who they would like to perform with, Minhyuk answered that he wants to work with other Korean bands, Jungshin on the other hand dreams of sharing the stage with the legendary Jon Bon Jovi. Member Jonghyun shared that he listens to a lot of Hip hop that’s why it will be such an honor for him if he will get to perform with DoubleK and GONZO again, while frontman Yonghwa has artist YDG in mind.

But aside from naming their idols, CNBLUE was also asked to share which Filipino food they are looking forward to try and which places they want to visit. The group’s leader Yonghwa said he wants to try Jollibee, in fact they might have it for dinner tonight. Minhyuk followed, saying that he wants to visit the Manila Ocean Park after having Jollibee for dinner, while member Jonghyun wants to see places where he can go diving.

Before the press conference wrapped up, each member was asked a question solely addressed to them.

Yonghwa, whose question was about song writing and composition, shared that there are times when the lyrics come first in his head, but it also happens that music waltzes in ahead of words. But if there’s one consistent thing about his brand of music production, he’s not one who likes being alone while writing music. He said he’d rather talk to different people, because that’s where his inspiration comes from – from interactions with other individuals.

Meanwhile, Jonghyun who has worked on a lot of CNBLUE ballads said that when he’s sad, that’s when he tries to write happy songs and when he’s feeling positive, that’s when the mood for “sad” songs comes in. “It really depends on the mood,” Jonghyun expressed through an interpreter.

Jungshin, who has been trying his hands on photography, was asked what types of photos does he like to take. Though he has been pretty busy, Jungshin said that his interest is particularly on taking photos of “daily lives” and of his dog. He added that he wants to share his photos on social media.

Lastly, Minhyuk who plays the drums was asked what he focuses on when jamming with the band. The second youngest member of the group answered that for him, every instrument in the group is important even though the drums are basically the foundation as they supply the beat. But whenever he plays with the group, he works hard on not becoming a “disturbance” to the other instruments so they can produce melodious performances.

Even before they can play tomorrow’s (Friday) show, CNBLUE already expressed that they would like to visit the country again next year once they have a new album to promote. But for now: “Please come to the concert and let’s have some great fun,” member Yonghwa said.