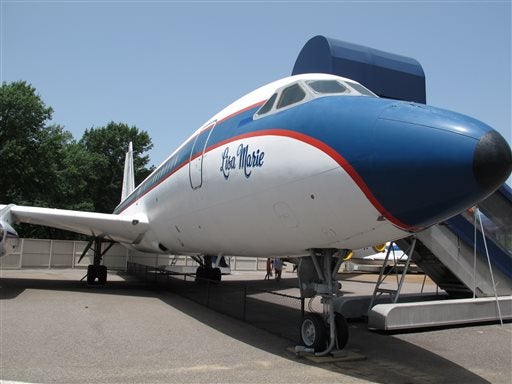 This photo taken on Tuesday, July 1, 2014, shows the Lisa Marie, one of two jets once owned by late singer Elvis Presley, that is used as a tourist exhibit at the Graceland tourist attraction in Memphis, Tenn. The company that operates the Graceland tourist attraction has told the current owners of the Lisa Marie, and another plane called the Hound Dog II, that it wants the planes removed from Graceland by late April 2015, or shortly afterward.  AP

MEMPHIS, Tennessee— For 30 years, tourists have paid money to get a look at two airplanes once owned by Elvis Presley at Graceland in Memphis.

But by April of next year, the planes named Lisa Marie and Hound Dog II could be gone. 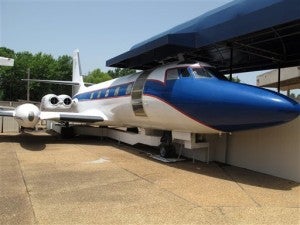 This photo taken on Tuesday, July 1, 2014, shows the Hound Dog II,, one of two jets once owned by late singer Elvis Presley, that is used as a tourist exhibit at the Graceland tourist attraction in Memphis, Tenn.  AP

Elvis Presley Enterprises, which operates the Graceland tourist attraction, has notified the planes’ owners that they should prepare to remove the jets from Graceland early next year.

The planes, owned by the OKC Partnership in Memphis, have been a tourist attraction since the mid-1980s. OKC Partnership and Graceland agreed to bring the two jets to Graceland, with OKC getting a share of ticket sales at the mansion.

In an April 7 letter to OKC Partnership’s K.G. Coker, Elvis Presley Enterprises CEO Jack Soden said the company was ending the agreement and asked Coker to remove the planes and restore the site on or shortly after April 26, 2015.

Dedicated Elvis fan Paul Fivelson of Algonquin, Illinois, says he expects many fans will be upset to hear the planes may be leaving.

“The people who come to Memphis for Elvis Week like seeing those planes there because it’s just part of the whole aura of what Elvis was about,” Fivelson said. “It would be kind of blasphemous to take them away, and I think there are probably a lot of fans who will feel the same way.” 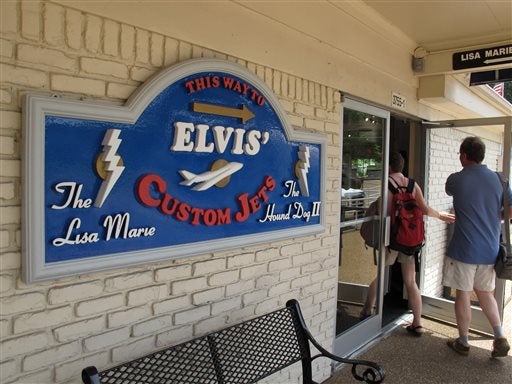 In this photo taken on Tuesday, July 1, 2014, tourist enter the Graceland attraction to an exhibit where two planes once owned by late singer Elvis Presley are displayed in Memphis, Tenn. AP

The disclosure also raises questions about the future use of the site where the airplanes now sit, across the street from Presley’s longtime home.

In November, New York-based Authentic Brands Group bought Elvis Presley Enterprises and the licensing and merchandising rights for Presley’s music and image from CORE Media Group. As part of the deal, Joel Weinshanker, founder of the National Entertainment Collectibles Association, acquired the operating rights to Graceland, which attracts about 500,000 visitors each year.

Earlier this year, Elvis Presley Enterprises announced plans to build a 450-room hotel, theater and restaurant, with a projected opening date of August 2015. Their plan was approved Tuesday by the Memphis City Council.

Today, Graceland visitors can buy a ticket that includes a tour of Presley’s home-turned-museum and the interior of the two airplanes.

The larger plane, a Convair 880 named Lisa Marie, is like a customized flying limousine, with a large bed, a stereo system, conference room and gold-plated bathroom fixtures. It was renovated after Presley bought it from Delta Air Lines. Presley took his first flight on it in November 1975. 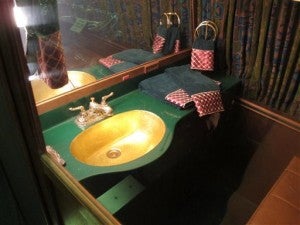 This photo taken on Tuesday, July 1, 2014, shows the bathroom inside the Lisa Marie, one of two jets once owned by late singer Elvis Presley, that are used as tourist exhibits at the Graceland attraction in Memphis, Tenn. AP

The smaller jet, a JetStar named the Hound Dog II, was also used by Presley.

Coker, 76, says OKC may sell the planes if they’re removed from Graceland, but he still hopes to negotiate a deal to keep the planes there.

Philippine pride in Memphis, birthplace of blues and rock-’n’-roll