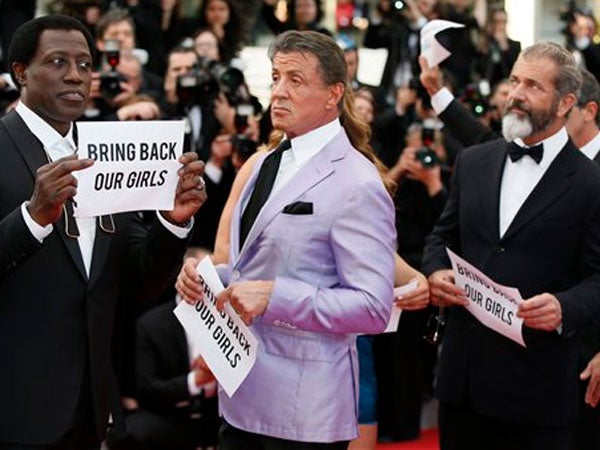 From left, the cast of The Expendables Wesley Snipes, Sylvester Stallone, and Mel Gibson hold up banners reading, “Bring back our girls”, part of a campaign calling for the release of nearly 300 abducted Nigerian schoolgirls being held by Nigerian Islamic extremist group Boko Haram, as they arrive for the screening of The Homesman at the 67th international film festival, Cannes, southern France, Sunday, May 18, 2014. AP

CANNES, France — The “Bring Back Our Girls” message has made its way to the Cannes red carpet for the second night in a row.

This time, it was the cast of “The Expendables 3” — which includes Sylvester Stallone, Arnold Schwarzenegger, Mel Gibson, Harrison Ford, Jason Statham, and Wesley Snipes — who each held up signs bearing the message. The phrase refers to the worldwide effort to bring home more than 250 Nigerian schoolgirls kidnapped by the extremist Islamic group Boko Haram a month ago. Despite a multinational effort, they have yet to be recovered.

Salma Hayek brought the message to the red carpet on Saturday night, holding up the sign as she arrived to preview her film “The Prophet.”

“The Expendables 3” is not an official selection at Cannes, but its stars have made the most of their Cannes visit — arriving on the Riviera Saturday morning in tanks.