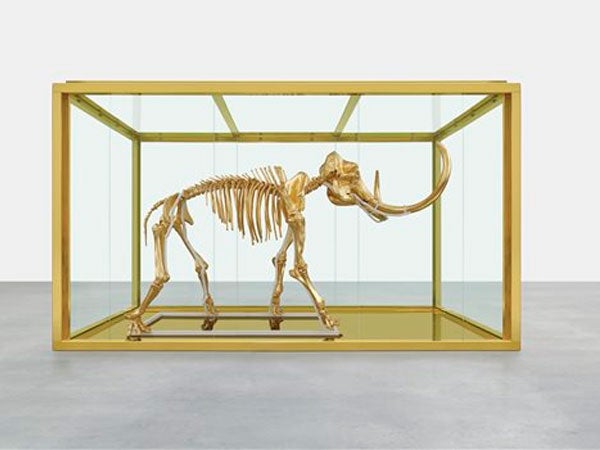 This undated photo released by Damien Hirst and Science Ltd., British artist Damien Hirst’s latest piece entitled “Gone but Not Forgotten”, which features the gilded skeleton of a woolly mammoth in a steel and glass vitrine, is displayed. Famed British artist Damien Hirst has created a gilded woolly mammoth skeleton encased in a gold tank to be auctioned off at the annual amfAR Cinema Against AIDS gala in Cap d’Antibes, southern France, on Thursday, May 22, 2014. AP

CANNES, France — Famed British artist Damien Hirst has created a gilded woolly mammoth skeleton encased in a gold tank to be auctioned off at the annual amfAR Cinema Against AIDS gala this week.

Titled “Gone but not Forgotten,” the three-meter mammal joins Hirst’s famous shark in formaldehyde and bisected cow in his “Natural History” series.

The one-of-a kind piece is expected to raise millions of dollars for the charity’s work in the fight against AIDS. Past auction items have included a trip to space with Leonardo DiCaprio and a kiss from George Clooney.

Held at the Hotel du Cap-Eden-Roc, the amfAR gala is one of the highlights of the Cannes Film Festival attracting support from global stars such as Sharon Stone, Heidi Klum and Aishwarya Rai. This year’s guest list includes Jessica Chastain, Berenice Bejo, Adrien Brody and Robin Thicke, who will perform at Thursday’s event.