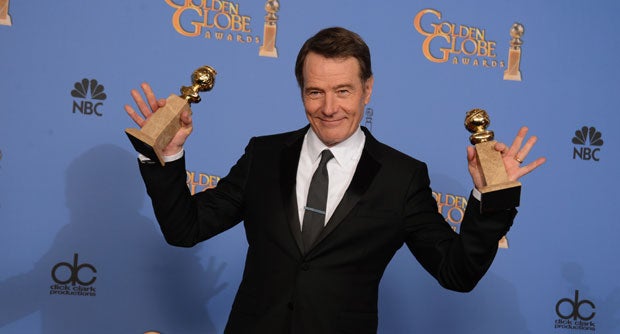 NEW YORK — Bryan Cranston is going to share some “secrets and lies.”

The Emmy-winning actor, known for his role as Walter White in “Breaking Bad,” has a deal with Scribner for what is described as a “deeply candid” memoir.

Scribner announced Thursday the book is due out in the fall of 2015. It is currently untitled.

The 58-year-old Cranston said in a statement issued by Scribner that he promises to disclose the “secrets and lies” he endured while starring in “Breaking Bad.” He said that from his tortured TV character he learned both “useful” and “dangerous” lessons.

Cranston also is known for his featured role in the Oscar-winning “Argo” and for his current performance as Lyndon B. Johnson in the Broadway show “All the Way.”

Read Next
Novelist Gabriel Garcia Marquez, 87, hospitalized
EDITORS' PICK
EDITORIAL: To a bike-friendly future
The Best Tech Gifts For The 2022 Holidays
Pagasa: Warm, sunny Sunday in most parts of PH
House energy committee chair Arroyo bats for cheap electricity
Is it safe to talk politics again at family gatherings? ‘The Reconciliation Dinner’ shows us what that’s like
vivo’s coming to town to grant wishes with more holiday promos
MOST READ
LOOK: Vhong Navarro transferred to BJMP detention facility in Taguig
The Elephant Man in the Senate
Posh village as ‘shabu’ haven
LOOK: Zanjoe Marudo bonds with Ria Atayde, her family
Don't miss out on the latest news and information.