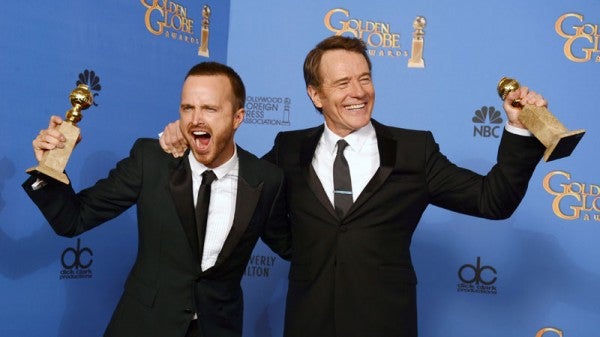 Aaron Paul, left, and Bryan Cranston pose in the press room with the award for best TV series – drama for “Breaking Bad” at the 71st annual Golden Globe Awards at the Beverly Hilton Hotel on Sunday, Jan. 12, 2014, in Beverly Hills, Calif. AP

It also won a best actor Golden Globe for its star Bryan Cranston for his portrayal of Walter White, a chemistry teacher dying of cancer who turns to making meth to bring in money for his family.

“This is such a lovely way to say goodbye to the show that meant so much to me,” Cranston said upon collecting his trophy at the Beverly Hilton.

It was the first-ever Golden Globe for Cranston, who was nominated four consecutive times for his performance in the critically acclaimed show that ran five seasons on the AMC cable channel before its late September finale.

Winning best actress in a TV drama was Robin Wright from “House of Cards” — the first original series on Netflix — for her role as the wife of a cunning US congressman played by Kevin Spacey.

In the comedy corner, new Fox series “Brooklyn Nine-Nine” won the prize for best series, beating established shows such as “The Big Bang Theory” on CBS and “Modern Family” on ABC, as well as HBO’s much-hyped “Girls.”

“This is way better than saving a human life,” quipped the show’s writer Dan Goor, who turned down medical school for show business.

Best comedy actress went to Amy Poehler, another “SNL” veteran and Globes co-host with Tina Fey, for her NBC sitcom “Parks and Recreation.”

“I’ve never won anything like this,” said Poehler, who thanked among others “my wonderful children, who are my double-A batteries” — after planting a big kiss on U2 frontman Bono on her way to the stage.

Giving Douglas an approving thumbs-up from the floor of the hotel ballroom was Matt Damon, who had also been nominated in the same category for the same project.

Honored as best supporting actor in a series, mini-series or TV movie was another Hollywood veteran, Jon Voight, who appears in the Showtime crime drama “Ray Donovan.”

Earlier in the evening, Elisabeth Moss — best known for her work in “Mad Men” — won the Golden Globe for best actress in a mini-series or TV movie for “Top of the Lake.”

And Jacqueline Bisset, a five-time nominee, won her first Golden Globe ever, clinching best supporting actress in a series, mini-series or TV movie for “Dancing on the Edge.”