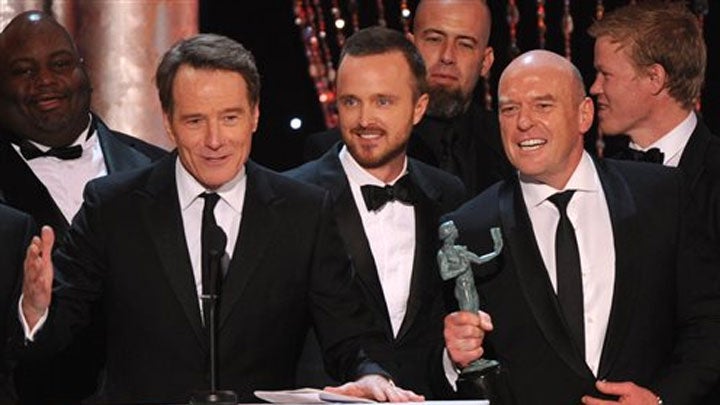 From left, Bryan Cranston, Aaron Paul and Dean Norris accept the award for outstanding performance by an ensemble in a drama series for “Breaking Bad” at the 20th annual Screen Actors Guild Awards at the Shrine Auditorium on Saturday, Jan. 18, 2014, in Los Angeles. AP

“What a way to go out in style!” Cranston said, accepting the ensemble’s award at the Los Angeles ceremony Saturday.

“We have the nicest bunch of white supremacist Nazis I have ever worked with,” said Cranston, looking over his cast mates. “I swear to you I would kill you all over again.”

Nyong’o won for supporting actress at the 20th annual SAG Awards in Los Angeles on Saturday for her performance as the singular slave Patsy in Steve McQueen’s historical drama “12 Years a Slave.” She thanked McQueen “for taking a flashlight and shining it underneath the floorboards of this nation and reminding us what it is we stand on.”

The Kenyan actress, who has been hailed for her red-carpet grace this awards season, recalled her celebratory phone call to her father when she got the part — her first feature film.

Leto was honored for supporting actor for his performance in the Texas HIV drama “Dallas Buyers Club,” in which he plays the gaunt transsexual Rayon. He dedicated the award to those who have died of AIDS and to “the Rayons of the world.”

“I am not here without Matt Damon,” said Douglas, after making a gay sex pun that made his co-star wince.

Julia Louis-Dreyfus has been a mainstay at award shows recently, both for her acclaimed HBO series “Veep” (for which she won an Emmy) and the romantic comedy “Enough Said” (for which she was nominated for a Golden Globe). She won a SAG trophy for female actor in a comedy series for “Veep,” and slyly mocked the award season crush by first thanking the Hollywood Foreign Press and then the Academy of Motion Picture Arts & Sciences.

“It’s hard you know because it’s awards season and things get confusing, much like elections,” said Louis-Dreyfus. It’s the sixth SAG Award for the former “Seinfeld” star, whose “Enough Said” co-star James Gandolfini was nominated posthumously for his supporting performance.

Actors make up the largest branch of the Academy of Motion Picture Arts and Sciences, so SAG-AFTRA union members (numbering more than 165,000) have perhaps more sway in determining Academy Awards winners than any other group.

SAG and the academy don’t always agree: Neither “August: Osage County” nor “The Butler” were nominated for best picture, and “The Butler” was snubbed entirely. The effects-heavy, sparsely peopled “Gravity” was predictably overlooked by SAG (except for a best actress nomination to Sandra Bullock), while it garnered 10 Oscar nods.

But the SAG Awards offer a window into support for Oscar favorites “12 Years a Slave” and “American Hustle.” Nyong’o’s honor came over “Hustle” star Jennifer Lawrence, the only individual nominee for the con-artist comedy.

The SAG Awards are one of the more collegial stops on the awards circuit, with winners almost uniformly express gratitude for an honor chosen by their peers. A good speech (like Nyong’o’s) can help stoke Oscar support.

Emma Thompson, a surprise snub in Thursday’s Oscar nominations for the “Mary Poppins” making-of tale “Saving Mr. Banks,” was just as much the witty, winning award-show attendee she’s been all season. As a presenter, the lead actress nominee noted the show’s cheesy elevator music soundtrack: “Is this music available on CD?”

SAG’s lifetime achievement award was given to Rita Moreno, the 81-year-old “West Side Story” actress whose career has spanned Broadway, television and music. Introduced by Morgan Freeman, the much-honored Latina legend danced to the podium before a standing ovation and let out a gleeful expletive.

Moreno serenaded the SAG audience with a few bars from “This Is All I Ask”:

“And let the music play/ As long as there’s a song to sing/ And I will stay younger than spring.”