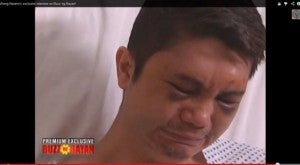 MANILA, Philippines – Another rape complainant surfaced against the embattled Vhong Navarro, accusing the actor-host of forcing her to do oral sex on Navarro’s “tiny penis.”

The 26-year-old complainant, who identifies herself as a female stunt double and a lesbian, filed the charges before the Quezon City prosecutor’s office on Friday, Philippine Daily Inquirer reporter Julie Aurelio tweeted on Friday.

In a four-page affidavit obtained by INQUIRER.net, the complainant said Navarro asked for her to go inside a sports utility vehicle (SUV) with him during their break in the taping of the telenovela “I Love Betty La Fea” in 2009. Navarro played the role of “Nicholas,” the best friend of Bea Alonzo’s titular character in the ABS-CBN series.

(You are a very beautiful lesbian. You should experience being with a straight man, so you may never want to be with another woman.)

Inside the vehicle, the complainant accused Navarro of forcing her to perform oral sex on him.

“Afterwards, he unzipped his pants and grabbed me by the hair and pulled me towards his hard and very, very, very tiny penis which appeared to be uncircumcised,” the complainant said.

When she threatened to bite his genitals, Navarro masturbated in front of her, the complainant said.

Navarro also forced to insert his finger in her genitalia, she added.

“I was in so much shock and disbelief at what happened, not just because that he even dared to think of doing such a perverted act to me, considering he knew that I was a lesbian, but also at the sight of such a weird, gross, and disgusting organ,” the complainant said.

Navarro fixated public attention in January when he posted a picture of his face swollen and beaten up. He accused businessman Cedric Lee and model Deniece Cornejo of setting him up and extorting money from him when he went to Cornejo’s condominium on January 22.

Meanwhile, Cornejo accused Navarro of attempting to rape her.

The National Bureau of Investigation has filed criminal charges against Lee, Cornejo and eight others after a CCTV footage showed there was short window of time for Navarro to rape Cornejo after entering the condominium. However, Cornejo claimed rape was doable for one minute.

Navarro’s lawyer Alma Mallonga has claimed the newest rape cases against Navarro were cooked up by Lee’s camp.